Rabbi Hanan Schlesinger describes himself as a “passionate Zionist settler” who in 2014 had a life-changing conversion after meeting Ali Abu Awwad and other Palestinians who were dialoguing with Israeli Jews. As both an Orthodox rabbi and a settler, that conversion created leadership opportunities for him, as well as the challenges involved in promoting a viewpoint which starkly differed from the views of his community members. He has taken up those challenges head-on.

The American-born Rabbi made aliya (immigrated to Israel) at the age of 20. In 2014, he cofounded Roots/Shorashim/Judur with Ali Abu Awwad, Shaul Judelman, and others, and currently works full-time as its Director of International Relations. Roots brings together Israeli settlers and Palestinians who live on the West Bank, creating a network of local Palestinian and Israeli grassroots activists working towards reconciliation through dialogue and events that build trust between the two groups.

The interview below, the first of two with Rabbi Schlesinger, was conducted on March 30, 2020. In it, he addresses how the current coronavirus pandemic is affecting Roots’ peace work, and also discusses Palestinian-Israeli cooperation in the health care system in Israel. He points out that many Palestinians are, sadly, already near starvation as a result of the current lack of work. A second interview will feature Rabbi Schlesinger’s views on how peace efforts, if they are to be successful, must involve religious Jews, Muslims, and Christians as well as the dramatic history of his conversion from viewing Palestinians as enemies to viewing them as full human beings and allies.

Susan Hoechstetter: Rabbi Schlesinger, you’ve been working with Muslims, Christians, and Jews in the West Bank through Roots to build dialogue and trust for several years. How is the coronavirus, which we are all focused upon now, impacting that work?

Rabbi Hanan Schlesinger: Now, instead of gathering person-to-person in meeting halls, we’re gathering online. In one way it’s actually more intimate because we’re getting to see each other’s houses. It’s against the law for Palestinians and Israelis to go to each other’s houses in the West Bank. But Skype and Zoom are not covered under that.  Israel forbids its citizens from entering Palestinian zones and forbids Palestinians from entering Israeli cities and settlements within the Israeli zones. 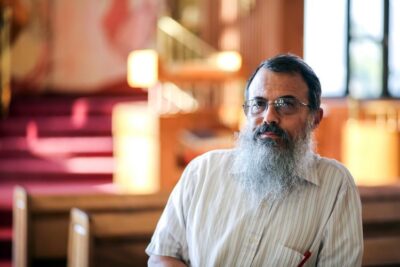 Our main mission is building relationships with Palestinians and the core of that work is hosting people at our Merkaz Karama Center (Dignity Center) in the West Bank between Bethlehem and Hebron, the area called Gush Etzion by Israelis. After years of efforts, Roots has started three nascent satellite groups of local Israelis and Palestinians in other parts of the West Bank. Until the virus struck, we had face-to-face activities of some sort almost every day. And being in the same room is transforming. Now, because of isolating due to the virus, we are not able to meet face to face. We decided, though, that we could do some of our work over Zoom, and are continuing many of our meetings that way. Our youth group just met. And our Jewish-Christian and our Jewish-Muslim groups have meetings planned. Tonight we’re hoping to have 30 Palestinian and Jewish activists meet by Zoom.

One problem is that there’s not much opportunity to bring in new people. Soon it will be Ramadan (the interview took place before the holiday began – SH), when Muslims fast from dawn to dusk, which is an opportunity to come together, across religions, over the dinner that breaks the fast. We have done this every year almost since Roots was founded, and there have been times when we had 100 people at the meal. It was wonderful. Certain Jewish people are more willing to meet “Muslims” than they are to meet “Palestinians.” They are the same people, of course, but more palatable and less threatening to some when framed as Muslims. Not doing the break-fasts this year will be a big loss.

And, the pandemic is not having a positive effect on Palestinians’ work here. The minute many Palestinians here don’t work, they don’t eat. I have recently heard that many are already almost starving. Some are scrounging in garbage cans looking for food. The Palestinians are basically stateless; they don’t have unemployment insurance and they don’t have bailouts like you have in the United States and like Israel will have.

So, we are going to ask our American Board to see if we can collect money to support meals for Palestinians during Ramadan. I’m hopeful that we can get American Jews, Christians, and Muslims to contribute. Currently, very few American Muslims contribute to Roots. Perhaps they will now. But of course Americans have their own problems at this time.

SH: You live in walking distance from your Palestinian neighbors. Has dealing with a very contagious virus brought about more Jewish-Palestinian cooperation?

The question is – are Israelis going to look more empathetically upon Palestinians where we live? That is not happening. My Jewish neighbors know just about nothing about what is currently happening with the Palestinians within whose midst we live. They don’t think about it. The few Palestinians they see, other than if they engage in Roots activities, work building houses or gardening. That work is not taking place right now, so there’s less contact. I’m sure my local Jewish community is thinking just about Jews.

SH: If the pandemic lasts a long time, what do you think it might mean for your future work?

RS: I have no idea. I generally feel that Israelis who live in Judea and Samaria are blind to the existence of Palestinians. With the current pandemic, it’s worse than before because Palestinians and Jews don’t even see each other in the streets because everyone is in their houses. For my Jewish neighbors, their newspapers – they read the right-wing paper, Makor Rishon – Google groups, and updates from local rabbis don’t make any mention of Palestinians. I appreciate how we in Roots are on Zoom with Palestinians now, but 99 percent of my Jewish neighbors don’t have that interaction.

RS: Yes, I can be reached at ravhanan@gmail.com. Readers can feel free to reach out to me. And readers are invited to join our English-language Zoom events and can obtain the Zoom link by sending me an email with a one-line explanation of who they are. Questions can be submitted beforehand to me at that email address.

SH: Thank you for your time and your groundbreaking work. 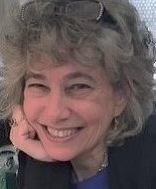 Susan Hoechstetter lives in Washington, DC where she writes about advocacy, social justice, Israel, and other topics.