As part of a series on Israeli and Palestinian efforts to bring about peace and promote Palestinian rights, Susan Hoechstetter spoke to Israelis and a Palestinian American, who work for social justice – leaders whom young progressives and other Americans can admire.

Hoechstetter: You bring together Israeli and Palestinian young people for a combined program. How difficult is it for the participants to work together? 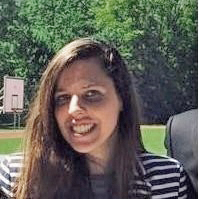 Anna Garbar: New Story Leadership (NSL) connects young Israelis and Palestinians both physically and socially as part of its mission. Rawan and I, and our program participants, disprove the myth that Israelis and Palestinians cannot work together. Rawan and I work together very well, not just because we like each other on a personal level, but also because we agree that this conflict must end, and that we must find a solution that will be sustainable. Because we are from the same region, we share a lot of opinions and thoughts. We are experiencing two sides of the same conflict. And when our delegates (program participants) get here to Washington, DC, for the first time they have equal opportunities to share their stories, to travel, to express their opinions. This makes partnering with each other much easier than back in the region.

SH:  Why do you focus on connecting individual Israelis and Palestinians? 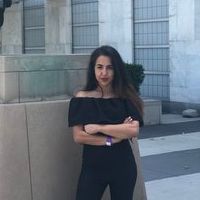 Rawan Odeh: This conflict has so many layers and complexities within both sides. And the political position taken by this American administration so far has left Palestinians feeling hopeless as to what any future peace might look like. People-to- people connections create hope and only have a positive impact on the future of the Israel-Palestinian conflict. We don’t want another generation, like mine, that doesn’t know each other. I don’t know the Israelis on the other side.

We need to connect all sides. People from the West Bank don’t connect with Gazans. You go to the Hebrew University and the Muslim students aren’t speaking with the Jewish students. Christians, Jews, and Muslims don’t connect with each other. They’re not physically able to talk. They’re segregated.

SH: How does the NSL program work?

RO: New Story Leadership aims to provide leadership tools for emerging leaders from Palestine and Israel in order to equip them with skills for creating political, economic, and social change in the region.

We bring five emerging leaders from Palestine and five from Israel to Washington DC every summer for seven weeks and we place them in pairs with American host families.

They gain access to congressional leaders through their work placements with United States Senators and Representatives. It’s crazy! Most Palestinians and Israelis never have that opportunity. We want them to speak to congressional staff and interns, as well as members of Congress, to tell their stories and educate them about the grey areas of the [Israel-Palestinian] conflict that most Americans aren’t aware of.

AG: The delegates’ average age is 25 or 26. Everyone who applies must present a project designed to create change in their community – preferably for both the Palestinian and Israeli communities. This project can be either an idea or something they have already started to implement.

RO: The number one deciding factor for accepting applicants is how much he or she wants to create change in their community. Over the last 10 years NSL has brought 99 delegates to the US.

SH: You said that they come to Washington to tell their stories. Would you provide some examples of those stories?

RO: Two years ago an Israeli delegate named Sapir told our congressional forum her story of growing up in Beer-Sheva experiencing rockets and hiding in shelters. After her, Khaled, a Gazan delegate spoke and said “I’m so sorry, Sapir, that you had to live in fear and hide in shelters because of the Hamas rockets, but I never even had shelters in Gaza to hide in.” Gazans’ stories are always emotional because they are in such dire need.

AG: Khaled was serious, and not sarcastic, when he said he was sorry. He felt bad because he knew it was painful for Sapir. But let’s put this in perspective. Yes, Israel is experiencing wars, but is more equipped to deal with them. Israel has an army; it has shelters, alarms, and other tools to protect Israeli citizens. Yes, it was scary for me to grow up in Haifa experiencing war after war after war, but I was never scared that in the middle of the night a Palestinian soldier would suddenly open my door and tell me what to do.

Telling both our Israeli and Palestinian stories is valuable, but people should get the message that the stories are not equal. One of the biggest problems for us when we talk about the conflict is that there is this perception that there are two sides and both “misbehave”. But they don’t misbehave in the same way. Let’s remember that both sides are not equal because when we try to find a solution you cannot ask both sides to do the same thing.

SH: Would you share examples of the delegates’ projects?

But bringing Israelis and Palestinians together is complicated. The night before we launched the yoga program, Palestinian rockets were sent to Tel Aviv and two Palestinians were killed by Israelis in Nablus.

When the delegates come to the U.S., NSL takes them out of the political situation and gives them a place to open up in a way they can’t at home.

SH: What is the impact of these projects and meetings? How do you measure their success?

RO: Our impact can be measured by the individual transformational process that our program provides delegates. They listen to each other’s stories and come to understand the present-day reality that each side lives through. That always resonates over the long term with our delegates.   And the “Projects for Change” launched by delegates have real on-the- ground impact.

Placing the delegates on Capitol Hill is powerful. We also have advocacy week which is 2 to 3 days on Capitol Hill when the delegates meet with members of Congress. Last year, when meeting with Senator Bernie Sanders (I-VT), our delegates all told 30-second stories. One Palestinian said: “I’m a nurse from Hebron. While wearing my Red Cross uniform, I was shot by an IDF soldier.” One Israeli said: “I’m an Israeli from Tel Aviv. My

18-year-old brother came back from the Gaza war with PTSD. I want you to know the human cost of war.” Senator Sanders called in his staff and told them they needed to take notes on what all the delegates said, and asked the delegates “What else do I need to know?” The delegates’ stories resonate with people in power.

AG:  And, our delegates influence American audiences besides those on Capitol Hill. We have events throughout the summer. We reach out to families, friends, and beyond to publicize these events. After 10 years we now have a circle of people who attend regularly, but we also try to attract new people. I think that it’s very important for Americans to hear messages from the Israeli and Palestinian delegates.

SH: You are both young women. Why are you doing this tough work now and how does it affect your career and your social interactions?

AG: I am studying international relations and I like politics but that’s not at all why I am involved in the conflict. It’s about our lives; it’s not a career fascination. It’s not that when we move on we will suddenly put this behind us. It’s about our families, our friends, our lives. We’ve been affected by the conflict every day since we remember.

As for friends, I surround myself with people like me. My friends are very supportive of what we do, even though I am probably the most radical of all of them. But if I take one step outside my friend group, I’m literally called a traitor, even by government officials.

RG: I grew up in Brooklyn and moved to the West Bank when I was 15. So, I experienced both the American privileged background and the experience of living under military occupation. I find that my work with NSL connects me with my family and my identity. Anna and I want to see a future where my baby sister Jenna has freedom of movement and doesn’t see IDF soldiers on a daily basis. I feel that any future peace is not possible unless there’s a new societal framework because Palestinians and Israelis are disconnected. They don’t meet. They don’t talk. Without connection, peace seems a far destination. My family is still living in the West Bank and Anna’s family is still in Israel, so the conflict is affecting our families’ lives every day.

AG: When I was a delegate, my mission was to tell Americans that you have the power to help us, not to tell us what to do, but to bring the influence of your government for the idea of a two-state solution, or any solution.  If you want to see the conflict end, you have to participate too. If you care about this, please raise your voice and say what you think, because our fate is in your [American] hands.

We appreciate all the help we get, whether it’s funding, emotional, or other support from families and individuals who support this program to empower Israelis and Palestinians.

One more thing, we also do speaking events here in DC and almost anywhere. We come and share our individual stories and our experience with working with NSL. If you would like to come to our events; information is on the website.

RO: If you want to get involved in NSL or support it, consider hosting a pair of Israeli and Palestinian delegates in your home for seven weeks. It’s an amazing experience to have them at your dinner table and engage them in discussions. If you have specific skills or experience like negotiating, lobbying, governmental experience, etc. and would like to give a session for our delegates, we’d like to meet with you. And, any financial support helps to keep the program going. We would be very grateful for that support.

SH: Thank you both for your time and your important work. 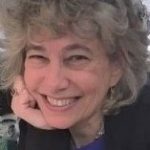 Sue Hoechstetter lives in Washington, DC where she writes about advocacy, social justice, Israel, and other topics