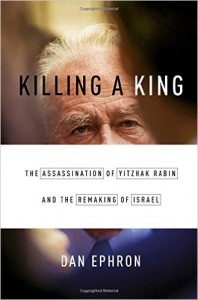 I’ve long shared the same perspective as my friend Hillel Schenker, the Israeli co-editor of The Palestine-Israel Journal, on the tragic and bloody half-year tenure of Shimon Peres as prime minister following Yitzhak Rabin’s murder in Nov. ’95. It’s not commonly shared or discussed in mainstream media, but a few days ago, Hillel sent along a Washington Post article by Dan Ephron, the author of the recently published, Killing a King: The Assassination of Yitzhak Rabin and the Remaking of Israel,  that explains in concise detail how Peres messed up a golden opportunity for peacemaking in early ’96.  (Hillel even questions the headline’s characterization of Peres as “most fervent peacemaker.”)

In short, the long-time rivalry between Peres and Rabin cast its shadow from beyond the latter’s grave.  Peres did not announce a snap election shortly after Rabin’s death, which he would have won by a landslide, because he wanted to win on his own record and not Rabin’s.  Then he okayed the Shin Bet assassination of Yihya Ayyash, the notorious Hamas bombmaker known as “the engineer.”  This precipitated a retaliatory wave of deadly suicide bombings during the election campaign that suddenly made Bibi Netanyahu’s candidacy competitive, and eventually won him his first term in office.

Ephron did not mention two other factors in the disastrous electoral result of May 29, 1996:

I don’t want to totally condemn Peres as a person and a leader.  For one thing, he served a very successful two-year term as prime minister in the late 1980s, when he succeeded Shamir in the rotation agreement following their virtual tie in the 1984 election.  But these errors in judgment set in motion events that continue to plague Israel to this day.

To read Ephron’s article, click on this embedded link: “Dan Ephron: How Israel’s most fervent peacemaker squandered his best chance.”