Holding a Mirror to Jewish Nationalism in Times of Strife

Holding a Mirror to Jewish Nationalism in Times of Strife 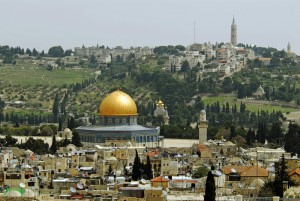 A third intifada looks to be around the corner. Unlike the previous two, there is no top-down coordination, no leaders at the head of the charge. This is a populist uprising. There is still time to avoid the worst, but we are hanging on a precipice. As individuals, we cannot do anything about settler violence, nor Bibi’s repressive policies, any more than we can do anything about Palestinian terrorism. But we can challenge ourselves and each other and uproot the racist discourse becoming ever more prevalent in our communities.

We can challenge each other to avoid sensationalist propaganda, turn our backs on rhetoric that demonizes other human beings for wanting the same peace and security that we long for, and look at each other with compassion instead of fear and suspicion. We can challenge half-truths and tribalism, and embrace some hard, complex, and complicated truths. This is hard to do when we are afraid for our lives, and the lives of our loved ones. Being vulnerable is scary, and being under attack for your lives terrifying. But we must recognize that this road we are on is not just counterproductive, but outright dangerous – for everyone, for all of us embroiled in this conflict. If we continue down this path, we will all of us, Israeli and Palestinian, Jewish and Arab, be burying many more dead. We should do everything we can to avoid that tragic outcome.

In this daily escalation of violence, Jewish Israelis are absolutely right to feel fear, anguish, and anger. Those of us in the Diaspora worried for our friends and family very likely feel similarly. I know I do. I have two younger brothers and a great many cousins and friends living all over Israel. There isn’t a day that goes by that I don’t worry for their safety.

But some in our communities are allowing this fear to justify some noxious actions. Some of my friends have been praising a certain video by Israeli-American Yitzchok Meir Malek, in which he “teaches Muslims a lesson” by shouting the Shema at the Adhan in response to the Muslim call to prayer. The implication is, of course, that Muslims should “know their place” and that Islam itself is somehow responsible for the actions of those who choose to murder. It is putting an entire faith to trial for the crimes of a select few. It is using the Shema, the holiest prayer in Judaism, as a vehicle to express exclusionary ethno-nationalism. It is using the (non-political, totally traditional) Muslim call to prayer as an excuse to weaponize his own religion. While no ones’ hands are clean in this, the re-casting of an ethno-nationalist conflict in purely religious terms is to ossify a difficult, but ultimately resolvable conflict into an essentialist religious dogmatic conflict – one in which everyone loses, for such conflicts by their very nature cannot be resolved. That he did it from the Silwan, a Palestinian neighborhood constantly eroded by Jewish settlers, just adds insult to injury. The “place” he is putting his Muslim neighbors is one of permanent subjugation, of enforced Otherness, and insisting they have no place in their own homes.

Some in our communities take it beyond the passive-aggressive weaponiziation of faith. Some are outright praising a toxic gun culture that glorifies violence. In the picture shown below, Israeli settler women are shown toting large machine guns, with the caption “the Jewish Tea Party of Israel. Jewish moms protecting their families!” The subtext of this image, in the praise of weapons outlawed to civilian use in most stable democratic countries, including in much of the USA, and the link to the pro-gun American tea party, gives a clear message. A clear pro-gun, pro-violence, Wild-West inflected, utterly tone-deaf and utterly American message. Israel is an already heavily armed society. The importation of the toxic and reckless American gun culture that is the source of so many violent shootings would be devastating, for Israeli and Palestinian alike. And yet this is being passed around social media and praised. (For the record, this group supports not just the annexation of the West Bank, but Jordan as well, and has garnered over 12,000 likes on Facebook. This is a fringe group, but a disturbingly well-supported one.) 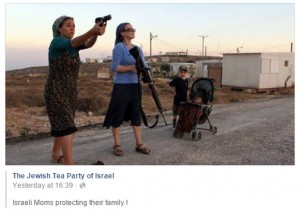 The issue with this rhetoric is that it never stops at just rhetoric. Discourse like the examples above creates a solipsistic tone-deafness in our communities so that we are conscious of only our pain and blind to that of others, including pain we cause. This is why my own childhood friend, an American-Jewish girl who married an Israeli man and made Aaliyah, was spending time on social media mourning the destruction of settler’s agriculture, but remained absolutely silent about similar Tag Mechir attacks and settler violence. She completely didn’t register the reality of Jewish terrorism, nor the brutality of the occupation, or the anguish this causes the Palestinians on the daily – a blindness shared by many Jews in both Israel and the Diaspora. And rhetoric like this only reinforces a society that not only promotes racist, ethnocentric violence, but is slow to persecute it, as indeed Israel has proven to be in its slow moving to prosecute abuse by its soldiers or settler violence, even in cases where it has resulted in brutal deaths, such as the burning of the Dawabsheh home and the death of their 18-month old son, Ali.

What we aren’t acknowledging is that Palestinians face violence almost daily, though most of us wouldn’t know it. And those of us who do so are happy to blame the occupation, and wash our hands of our own complicity, however slight. The violence being expressed by the Palestinians who have shot, stabbed, and otherwise harmed Israelis is immoral, shameful, horrible, and inhumane, but it is also partially the result of our own actions. Because if we were not upholding the occupation, and if we were not turning a blind eye to our fellows who promote a close-minded, ethnocentric, ultra-nationalist, and right wing agenda, there would be less hopelessness among the Palestinians, more progress economically and politically, and therefore much less fertile ground for extremists to sow their deadly, vile fruit. It is true that the growing religious extremism in Palestinian society is troubling, as is the exclusionary nature of Palestinian nationalism. Palestinians can and should take responsibility for developments in their own society, including anti-democractic ones. But it is our actions that were partially responsible for allowing these noxious developments more room to take root. And I posit that we, Jews within Israel (and without), aren’t doing much better, as our own growing ultra-nationalist, religious extremist turn in our society has been just as damaging to ourselves as a nation, a state, and to the dead-in-the-water peace process. Both our societies are in a race to the bottom, and the casualties are not just the lives of our citizens, but our very humanity.

The Days of Awe are over. Sukkot has only just ended. We are meant to have used that time to examine ourselves and our communities, address our mistakes, aim to do better, and celebrate this together. I urge my community to remember the prophets Michah, 3:4 and Isiah 1:4, where they speak of nations forgetting the art of war, and the beating of swords into ploughshares. These ploughshares not meant to be used as cudgels to beat our neighbors, or as tools to justify the stealing of another’s land. “Do not stand upon your fellow’s blood” extends to all people, not just Jews. “Justice, Justice you shall pursue” rings out a clarion call for action from Deuteronomy 16:20. “Let justice flow like a river, and righteousness like a never-failing stream!” calls out Amos 5:24. These ideals of justice and fellow-feeling are the cornerstones of our religion and culture. If we MUST drag religion into the political sphere, let it be these notions, the notions of humanity, compassion, and justice.