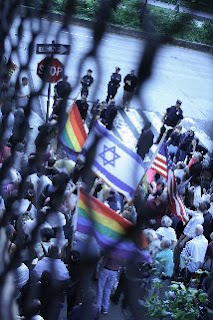 Meretz USA’s New York headquarters has a pile of faxes with antisemitic, anti-Israel and anti-gay hate messages from the so-called Westboro Baptist Church in Topeka, Kansas. But we are only one of many Jewish organizations that have been so targeted.

Paraphrasing these faxes, they stated that “Jews killed Jesus” and are “cursed of God,” and that “it’s a known fact” that “a disproportionate number of Jews are fags or support fags.” The Anti-Defamation League, among other groups, has documented their hate messages.

Among their bizarre activities, WBC supporters picketed the funerals of Matthew Shepherd, a young gay man who was brutally murdered in Wyoming a few years ago, and of the security guard recently killed by a gunman at the US Holocaust Museum in Washington, DC. See the Wikipedia entry for a more complete discussion of this hate group that claims to be a Baptist church (totally disavowed by official bodies of the Baptist religion).

They struck New York directly on Sunday, with a dozen members who picketed 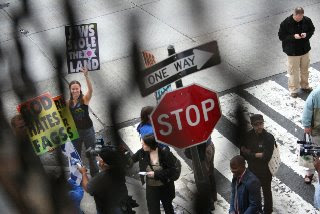 Congregation Beth Simchat Torah, the mostly gay synagogue in downtown Manhattan. CBST is based in the Westbeth housing complex, a community for artists, such as our own former president, Lilly Rivlin, a filmmaker. She reported on the event and transmitted photos of the scene. Members, neighbors and friends of CBST counter-rallied against the haters.