Haqel: In Defense of Human Rights is an Israeli NGO engaged in strategic litigation on behalf of Palestinian landowners and entire communities in the area of the West Bank classified as “Area C” under the Oslo Process. We maintain a specific focus on the South Hebron Hills, the Bethlehem region, and the area of the Jalud Valley in the northern West Bank. Haqel currently represents over 18,000 beneficiaries. Haqel, meaning “field” in Arabic and Aramaic, is the root of the Hebrew word for both “agriculture” and “farmer”. The field is a symbol of renewal, an essential source of income, and is integral to Palestinian life and culture. Haqel’s work presents the Palestinian narrative. The sabra plant, the organization’s logo, symbolizes resilience in the face of dire hardship.

Area C of the occupied Palestinian territories (oPt) makes up sixty percent of the West Bank and falls under full Israeli military and civil control. The indigenous Palestinian population there subsists from a traditional way of life as farmers and shepherds. These communities suffer some of the most devastating effects of human rights and international humanitarian law abuses in the oPt. Landowners struggle to eke out an existence and are faced with ongoing harassment, attack, and intimidation by settlers living in close proximity to their lands. Farming and cultivating these lands are extremely challenging. Landowners are threatened, harassed, and often attacked by marauding settlers who prevent farmers from accessing their lands. Settlers make constant attempts to take over lands that are left inaccessible to their Palestinian owners. 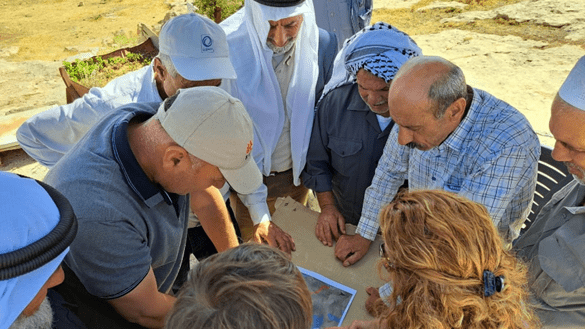 As access becomes increasingly difficult, huge financial losses are incurred by farmers due to their inability to reach their lands on a sustained basis. The ongoing presence and control of the Israeli security forces and the State’s declaration of large swaths of land as closed military zones, State lands, and nature reserves have resulted in forced displacement of families and communities and expropriation of thousands of dunams of land. In addition, as a result of discriminatory planning in the occupied territories, leaving Palestinians no choice but to build without permits, homes and essential structures are faced with the ongoing threat of demolition resulting in increased poverty and marginalization in communities and villages throughout the oPt.

In response to the deepening crisis in the Southern Hebron Hills area of Masafer Yatta, recently declared a live firing zone by Israel’s High Court of Justice (known as the 918 Firing Zone), Haqel has represented communities in Masafer Yatta regarding a military order issued to construct a patrol road between the villages of Bir Al Eid and Jinba. This road would not only expropriate 278 dunams of privately owned agricultural land, but severely restrict freedom of movement and deny residents the ability to access emergency medical care and other essential humanitarian services.

It is within the context of this difficult reality that Haqel’s legal representation is critical to Palestinian landowners and their communities to ensure their survival and sustained viability. Haqel’s legal team works to thwart displacement of Palestinians by preventing encroachment on and expropriation of privately-owned lands, protecting farmers’ rights to land access, and demanding better enforcement of the rule of law. 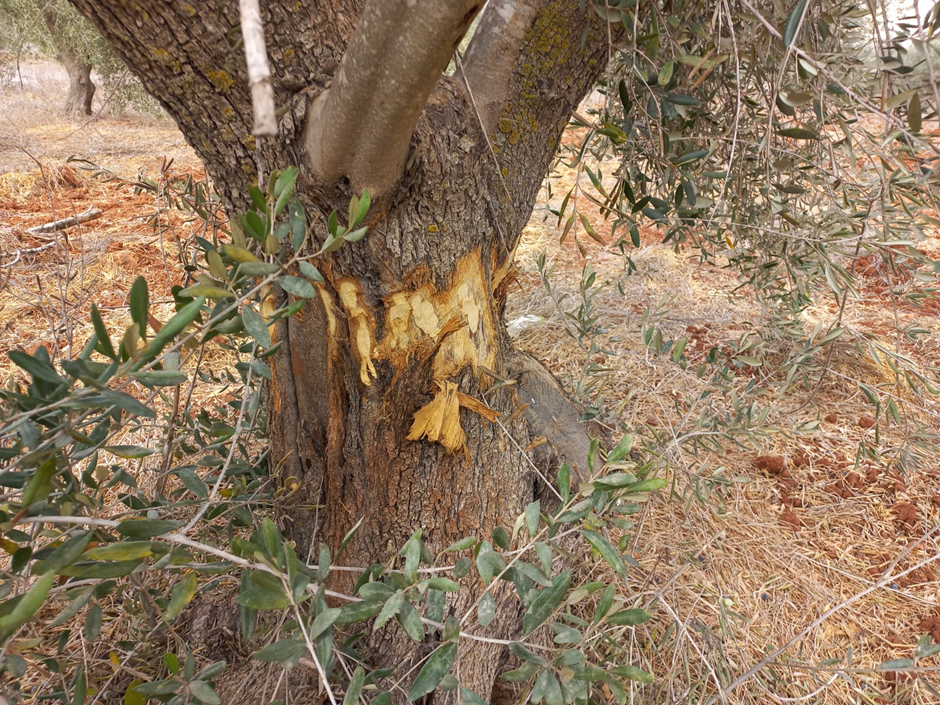 Haqel is co-directed by Dr. Adv. Quamar Mishirqi-Assad and Adena Ben-Reuven. Adv. Mishirqi-Assad is the director of Haqel’s legal work. She is an expert on local law, international human rights, and humanitarian rights law. Fellow NGOs, activists, and land rights scholars rely on her expertise and experience. She recently attained her doctorate from the University of Haifa. Adena Ben-Reuven, originally from South Africa, has over 25 years of experience in fundraising and financial and organizational management. She is responsible for the daily operation of Haqel. Although Haqel was established in 2016, Haqel’s Co-Directors have been working on behalf of the project beneficiaries since 2005.

Haqel’s holistic approach addresses the multiple aspects of life of the Palestinian population in the oPt, which is supposed to enjoy legal protection under the law of occupation. Legal intervention cannot be tackled in a vacuum, but has to address all aspects of socio-economic and cultural life under occupation. In this respect, Haqel’s approach is unique and is driven from the grassroots upwards. As a Palestinian, Adv. Mishirqi-Assad relies on close, personal, longstanding connections with landowners, community activists and leaders, village mayors, and heads of village councils. Haqel works synergistically in cooperation with a wide range of Israeli and Palestinian NGOs, which serves to better address the multifaceted aspects of human rights violations in the oPt.

Despite the challenges, Haqel’s work has had unprecedented and life-changing impact on hundreds of landowners and entire communities throughout the oPt over the last 17 years: 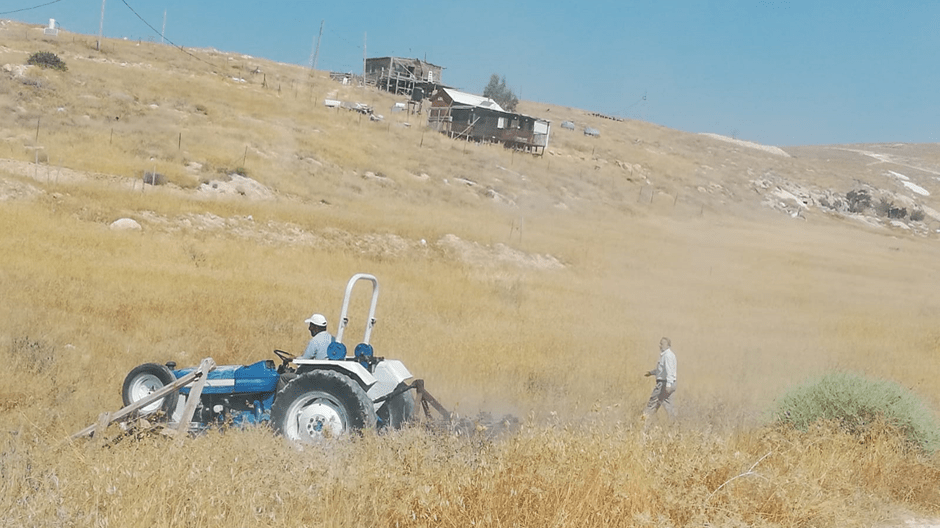 The family, from the village of Jalud, northeast of the settlement of Shiloh, owned 250 dunams (roughly 62 acres) of agricultural land. Until a little more than 20 years ago, the family patriarch cultivated the fields and planted crops of hummus, lentils, wheat, and barley. In the fall, he plowed and sowed ahead of the rains; in the spring and early summer, he brought in the sheep and harvested. The harvest helped support the large family.

It is not always easy to prove rights to land in the West Bank, but the Haj Muhammad family does have Jordanian title deeds. These have been held by them since the days when the family’s grandfather cultivated the land in the 1940s. At the beginning of this century, the family was expelled from the land, by settlers from the settlement of Shiloh who sought to expand the territories they possessed. Vineyards were planted and the “Olive Oil Land” company was established by settlers, who now sell the prestigious boutique brand, “Meshek Ahiya,” which produces and markets olive oil, wine, olives, and tahini.

Haqel has been engaged in a lengthy legal battle since 2007 to prove the family’s ownership and win back these lands through the Israeli courts. In 2007, the Civil Administration recognized that these were privately-owned lands and ordered that the vineyard be removed, but there have been multiple delays in implementing the order. The most recent delay included a postponement until February 2023 as a result of the year of shmitah, with its religious injunction to do no agricultural labor.

In an interview with Zman Israel, one of the family members said: “The whole village knew that this is our land. It was our main source of livelihood… I feel immense pain when I see the pictures of my father cultivating these lands, which were taken from us by force. My father died in 2017 at the age of 58, … we have been fighting since his passing to get the land back.” 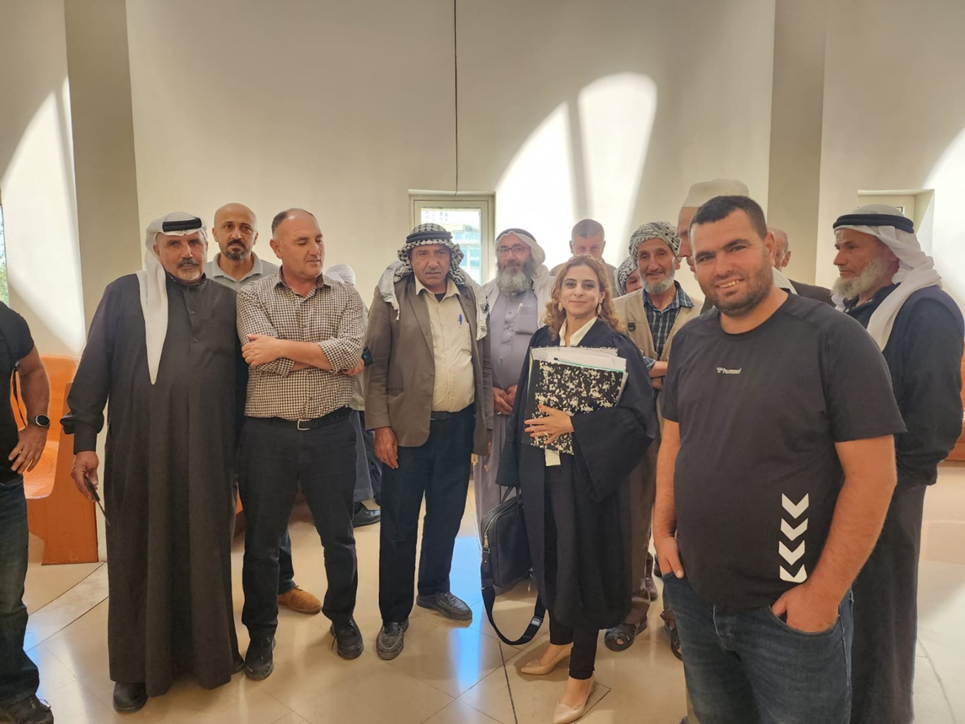 Haqel will continue to work to ensure that the order is in fact implemented and the lands returned to their rightful owner.

To learn more about Haqel, please visit our website at haqel.org.il and read our 2020, 2021, and 2022 end-of-year newsletters summarizing our work. To contact Haqel, write to development@haqel.org.il. 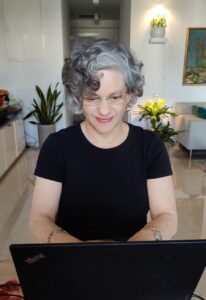 Adena Ben-Reuven is Co-Director of Haqel. She made aliyah from South Africa in 1994. Before the establishment of Haqel, she worked at Rabbis for Human Rights for 17 years in several roles including heading up the Resource Development Department. She has a B.A. (Hons) and a CPIR from the University of the Witwatersrand, Johannesburg and an LTCL from the Trinity College of Music, London. She lives in Jerusalem with her husband and two sons.