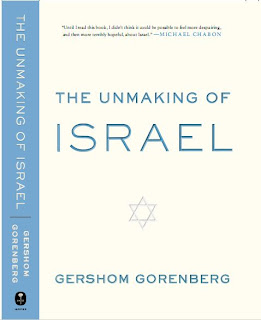 The American Prospect magazine’s Israel correspondent, Gershom Gorenberg, asked on July 19, 2012, “Why did the most recent coalition in the Israeli government only last ten weeks?” His answer: “It’s the Occupation, Stupid“:

…. By bringing Shaul Mofaz’s centrist Kadima Party into his government in May, Netanyahu sought to avoid early elections. Among the big things that new friends Shaul and Bibi promised to do were ending the widely resented draft exemption for ultra-Orthodox men and jump-starting the peace process with the Palestinians. In other words, Netanyahu would show that he was really a moderate, and that he had been waiting for Kadima’s support to rule as one.

The explicit reason that Kadima left the coalition on Tuesday was irresolvable differences on the draft issue. Turns out that Netanyahu is not any kind of moderate. He’d like to maintain a façade that he is willing to agree to a two-state arrangement, and that he’d sadly compromise on the West Bank eternally belonging to Israel, if only the Palestinians were willing to talk without setting preconditions. But the façade is crumbling.

…. Near the Jordan River in the northern West Bank is a settlement called Givat Sla’it, established in 2001. It’s what’s known as an illegal outpost—illegal, that is, even according to the laws applied by Israel in the West Bank. The laws require cabinet approval for a new settlement, but approving new settlements after the 1993 Oslo Accord would have been an international embarrassment.

Under the Bush administration’s 2003 “road map” for peace, Israel committed itself to removing a number of outposts, including Givat Sla’it. Naturally, it’s still there. This week Ha’aretz reported that the Defense Ministry has now “contracted an architect to resume construction” at the outpost. This is part of a trend: The Netanyahu government has stopped paying lip service to the idea that the outposts are an aberration. Instead, it’s developing them.

…. a panel on higher education operating under Israel’s Civil Administration in the West Bank approved transforming a college in the settlement of Ariel into a university. Israel’s Council of Higher Education, a government agency, had already rejected the change, but since Ariel is in the West Bank, not inside Israel, the council was powerless. The presidents of all seven Israeli universities had issued a joint statement against creating a university in Ariel. They said the step would divert funds from their institutions, which have already been under-budgeted for a decade. …

But Netanyahu’s education minister, Gideon Sa’ar, and his finance minister, Yuval Steinitz, put their full weight behind the university in Ariel. Steinitz promised a budget for the upgrade. For the Netanyahu government, no sacrifice for the settlements is too great. Settlers want a university to show that they are part of Israel, so they will get one—even if the bureaucratic maneuvers are based on the fact that the West Bank isn’t part of Israel. ….

You may read this entire article online.