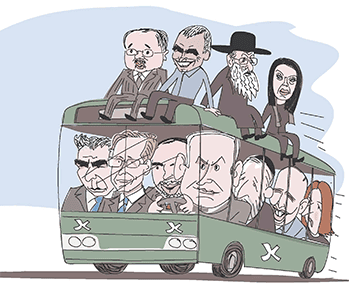 Partners for Progressive Israel had a fascinating conference call today with Gadi Baltiansky, the Director General of “Education for Peace Ltd.,” the Geneva Initiative. As a former journalist and a leader of the peace movement, Baltiansky has a unique inside perspective on the upcoming Israeli election. Not only is Baltiansky informed on the latest polls, he participates in a peace camp umbrella group which includes the Council for Peace and Security, Peace Now, One Voice, Blue and White Future and the Geneva Initiative. The leaders meet two-three times a week cooperate and coordinate their work around the election. As individuals and organizations they work and volunteer in the campaigns of Meretz, the Zionist Camp, Shas, Moshe Kahlon’s Kulanu party, and even Avigdor Lieberman’s  Yisrael Beiteinu party. Baltiansky’s inside knowledge of the various parties’ election campaigns makes his perspective fascinating.

When asked, for example, about his predictions for the future government, Baltiansky refused to surrender to the common assumption that the choice is between clear left and right. He told the audience that we should not rule out the possibility of a unity government, headed either by Benjamin Netanyahu or Isaac Herzog, which would exclude both Meretz on the left and Naftali Bennett’s HaBayit HaYehudi on the right. Baltiansky suggested that since both Netanyahu’s Likud party and Hertzog’s Labor party (the Zionist Camp) are currently expected to win 24 seats each, a coalition government will allow Hertzog and Netanyahu to reduce the pressure of smaller parties. To be sure, Baltiansky does not think this will be a good government, but that it is a possibility that should not be ruled out.
Listen to the audience for many other fascinating insights into the forthcoming Israeli elections.