Demonstrating for a better Israel

Demonstrating for a better Israel 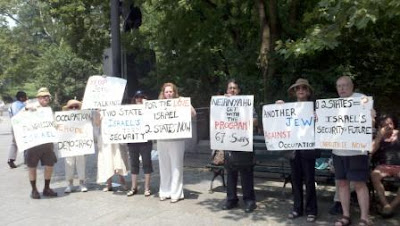 It was hot in New York City yesterday.  Very hot.  Sauna hot.  But it felt good to be on the street.  Really good.

When we planned our demonstration campaign, “Netanyahu, Don’t Lead Israel Off a Cliff!”, we knew our timing wasn’t optimal.  After all, who starts a campaign in the middle of summer?!  The student population is dispersed, Jewish youth movement leaders are away at summer camps, and most of the rest of us are thinking about getting away on vacation, or beating the heat.  “Maybe we should just put this off until September?”, we wondered.

But quickly we realized how ridiculous this thought was.  We were launching this campaign davka because the situation is urgent, davka because the danger to Israel’s future is all too real.  How could we turn around and decide to put it off until it was more ‘convenient’ or the logistics were better?

Six months ago, I wrote a short column, asking the rhetorical question, “Can Democracy Unravel Just Like That?” as Israel’s Democratic Camp coalition geared up for its first major rally in defense of civic freedom.  The situation since then hasn’t improved – as the recent passage of the Boycott Law reminded us.  And although we did enjoy a small victory this past week, when the Knesset voted down an effort to set up a special investigative committee designed to officially tar Israel’s human-rights community as unpatriotic, the danger is still palpable.  Just a few days ago, Labor MK and would-be party chair, Isaac Herzog, declared that, “Fascism has become rooted within the camp, it is no longer on the margins.”

So we knew there was no time to lose.

I should note that our goal is not to maintain a symbolic presence.  Not to be a “kol koreh bamidbar” – a voice of one crying out in the wilderness.  And not just to salve our own consciences so that we can look back one day and say, “well, at least we tried”.  Our goal in starting this campaign is to generate a groundswell of American Jews who understand the dangerous direction in which Israel has headed, who understand the proximity of the tipping point, and who will decide to liberate themselves from the paralysis that has kept them from speaking out – a paralysis caused by the fear of being labeled “anti-Israel”, “naive”, “self-hating Jew” or any number of possible epithets, such as the one I was called in a recent email, “useful idiot”.

There is a desperate need to galvanize a large American Jewish voice which speaks to Israel’s leaders not as Americans, but as Jews and Zionists who are genuinely concerned that the country is not just moving in the ‘wrong direction’, but is actually heading for an “abyss”, as Kadima leader Tzipi Livni warned a few days ago.

I might be wrong, or over-optimistic, but I think it’s going to happen.  The signs of discomfort among ‘regular Jews’ are growing, and even American Jewish stalwarts who are loathe to ‘air the dirty laundry’ with Israel in public, are increasingly publicizing their dismay over Israeli policies.  And it’s not just the centrists anymore, like Tom Friedman or Jeffrey Goldberg, who recently blogged about whether, “Maybe It’s Time for American Jews to Boycott Netanyahu”.  It’s World Jewish Congress President Ronald Lauder and the ADL’s Abe Foxman and the Conservative Rabbi Mark Golub, the head of Shalom TV, and David Harris of the American Jewish Committee, who stated without any ifs-ands-or-buts that Israel’s, “anti-boycott law is undemocratic”.

Still, despite the growing number of words being written and the important tool of digital activism, we knew there is something different about showing up in body and being counted, and being seen.  Something special.  Something visceral – from the word, “viscera”, the abdominal cavity.  Or in Yiddish, “kishkes”.

Our concern for Israel is rooted deep in our kishkes, and we knew that the only way we could fully express this was to be on the street.  In the summer.  In the heat.  And in the rain if we have to.  Every Thursday, at 12:30 pm.  I hope to see you there next time – the details are on our website.