Debating one state vs. two

Debating one state vs. two

This is from Israeli journalist and peacenik, Gershom Gorenberg:

Is the two-state solution for Israel and Palestine still achievable? Is the one-state alternative even plausible?

I’ve just debated one-state advocate Dimi Reider of +972 Magazine. You can watch the whole debate on Bloggingheads at http://bloggingheads.tv/diavlogs/39111 or, if you prefer, zoom in on this segment where I argue that the one-state “solution” leaves the difficult issues unsolved. 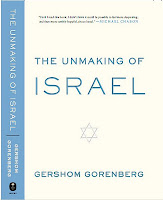 Gershom Gorenberg
Blog: southjerusalem.com
Twitter: @GershomG
Author: The Unmaking of Israel (Forthcoming from HarperCollins, November 2011)
The Accidental Empire: Israel and the Birth of the Settlements, 1967-1977
The End of Days: Fundamentalism and the Struggle for the Temple Mount