Daniel Gutwein and the Raiders of the Welfare State

Daniel Gutwein and the Raiders of the Welfare State

Last week I returned from a Fact Finding Trip to Israel. It was a life changing experience and I promise to share some of what I learned in due time. We met amazing people and inspiring leaders. Many of us landed in Israel feeling despair and within a week regained hope in Israeli society.

Meeting historian Danny Gutwein was the peak of the trip. Gutwein is one of the most prominent public intellectuals of the Israeli Left today. He teaches Jewish History at Haifa University, but spends much of his time inspiring, building and supporting a grassroots movement which offers an alternative political vision and action. Gutwein has a huge following. During the conversation, one of the participants asked him why not run for a Knesset seat. Gutwein argued that it would only limit his influence on Israeli society.

I am usually not much of a groupie. Gutwein is the exception. Sitting in his presence felt like sharing space with Antonio Gramsci. For me, the fact that most knowledgeable and engaged progressive American Jews haven’t heard of Gutwein is the quintessential proof of the gap between the life experience of Israelis and its representation in the US. To quote the recent Pew research: 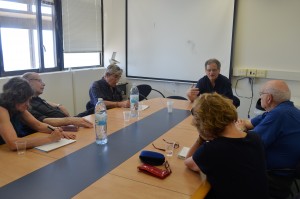 Why is this gap important? Because Progressive American Jews are frustrated with Israeli politics. Those who have given up on Israel argue that Israelis are simply racists and do not share “our values.” Those who defend Israelis, on the other hand, speak of living in fear of terrorism and wars. But neither these nor those understand the underlying social-economic causes of the situation. Most often they know nothing of the cost of living, they speak with disdain about “the cottage cheese uprising” and have not even heard of the mass demonstrations against Netanyahu’s gas deal. They want to influence Israeli society, but know very little about it.

So here is your chance. Gutwein participated in the television Social and Economic Policy documentary series, the Silver Platter (Magash Hakesef). The series had over three million viewers.  It was so popular that Channel 8 was pressured to take it off the web. I have written about this episode after watching it for the first time last December. But now I am excited to say, it has English subtitles. Take an hour to watch it. You will not regret it.