Conversations – The Israeli Left in a Center-Right Government

Conversations – The Israeli Left in a Center-Right Government

The Israeli Left in a Center-Right Government:
Is There a Sweet Spot between Principles & Pragmatism?

This webinar took place on Feb. 16, 2022. The transcript has been edited for length. The full recording is here.

Karen Shapiro: Welcome. I’m Karen Shapiro, vice president of Partners for Progressive Israel.  “The Israeli Left in the Center-Right Government: Between Principles and Pragmatism.” We are joined by member of Knesset for Meretz, Mossi Raz, political scientist and former MK, Naomi Chazan, and our Moderator, Einat Ovadia, executive director of the Israeli Human Rights NGO, Zulat.

Partners for Progressive Israel is an American not-for-profit organization dedicated to the achievement of a durable and just peace between Israel and Palestine. We further believe in the need to ensure civil rights, equality, and social justice for all of Israel’s inhabitants.

Please visit our website at progressiveisrael.org. We appreciate contributions while you’re there.

Now, for our participants. Naomi Chazan is Professor Emeritus of Political Science and African Studies at the Hebrew University of Jerusalem and codirector of the Center for the Advancement of Women in the Public Sphere at the Van Leer Jerusalem Institute. Naomi served three terms from 1992 to 2003 as a Meretz party member of the Knesset.

Mossi Raz is a member of the Knesset for the Meretz party elected earlier this year. He previously served as a Knesset member from 2002 to 2003 and from 2017 to 2019 as well as its Secretary-General. Mossi is a lifelong political activist promoting Arab-Jewish coexistence in Israel, an end to the occupation and environmental sustainability.

Einat Ovadia is the executive director of the NGO Zulat: For Equality and Human Rights. For the past 10 years, she has served in various key positions in Israeli politics in both coalition and opposition roles. Einat has extensive management experience and is a leading left-wing social and political activist. 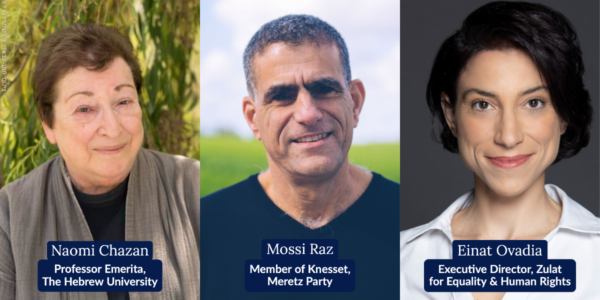 Einat Ovadia: Meretz had been in opposition for over 20 years until last year, when this government was formed. Meretz has always offered a clear voice against the Occupation and in favor of human rights and equality, against discrimination, in favor of religious freedom and freedom from religion, in favor of promoting equality for women, the LGBTQ community, and especially it has led a clear political voice for two-state solution. Mossi, do you think that Meretz has the same voice right now sitting in the coalition? Is it able to advance its agenda sitting with all those to its right?

Mossi Raz: The first reason for supporting the government is what it would be if we didn’t. In no way would it have been something progressive: the alternative was Bezalel Smotrich, Itamar Ben-Gvir, Avi Maoz, and Netanyahu, with Netanyahu being likely its most moderate member. There was no better alternative.

The second reason is that we have created something novel: For the first time there is cooperation between Arabs and Jews in the coalition. It’s not only the United Arab List (Ra’am) Party. Meretz has three Palestinian representatives, one as a minister and two as members of Knesset; Labor has one; Blue and White has one; even Yisrael Beiteinu has an Arab Palestinian MK. I think it extremely important that Israelis now see that Arabs are part of the game– because they were never part of the game. In the future every government will have Arab representation.

The third important reason is in spite of the fact that we are admittedly not effective on the big issues—the occupied territories, the citizenship bill, and other major issues. But, for the first time, people are starting to talk about our issues. People now talk about settlers’ violence more than ever in the history of the Occupation. People now talk about the future of settlements. On the citizenship bill [barring permanent residency in Israel for most West Bankers marrying Israelis]: people outside the small circle of Meretz activists or human rights activists never before talked about that. The discussion that we had about that is important because it lays the groundwork for the future.

The fourth and last reason is the fact that, as you said, we have the Health Minister and some deputy ministers. They are doing great work on LGTBQ, women’s, environmental, asylum seeker issues and the like. The Ministry of Health is now becoming one of the most liberal anywhere in the world. And people are starting to take environmental issues seriously.

We always want to vote for what we believe in, but is being in permanent opposition effective? I myself am not certain. Quite apart from how coalition participation may affect our future electoral results.

Naomi Chazan: We are no longer in the 1990s, and we have to think somewhat differently. I want to emphasize the importance of this “change” coalition in bringing Palestinian citizens of Israel into the center of decision making. And our ministers are doing a fine job. But the central question remains, even if you make mild changes, some of them on marginal issues, what if you cannot succeed in making a dent on the critical questions—the deepening of the Occupation, the lack of commitment to a negotiated settlement, and growing inequalities within Israel? I don’t know where the tipping point is, but we can’t afford to fudge about the political decisions that are taking place. Yet politics is also about creating new alternatives as well as leveraging the existing ones. It is our job to create change in a setting where it is not at all clear that the current government is better than its predecessor on these key issues.

Einat: So what can we do—on settler violence, on outpost legalization, on demolitions?

Mossi: Many people accepted that this government would do neither annexation nor a peace agreement. But this is a false “middle way”: the Occupation becomes deeper and deeper; we face more settlement and more settlers. We accepted a right-wing policy in order to be in this government. And, it turns out, that the most problematic person is Gantz, who is usually not associated with this right-wing. For our part, we have to be down with the activists fighting the Occupation, in East Jerusalem, and elsewhere. At the same time, we exert the influence we can on the Prime Minister, on the Foreign Minister, and others. Still, we need criticism, and we need to be pushed.

Naomi: Mossi is a super parliamentarian. But, on settlers, home demolitions, settlement activity, he was most effective when he wasn’t in the Knesset. That is, organizing demonstrations, being on the front lines, speaking out, mobilizing, etc. The classic two state solution is now gone.  There is too much oppression and too much intertwining of Palestinians and Jews. The position Mossi now represents is “let’s improve” the situation by blocking terrible things, but will working on the margins end the Occupation? There is something terribly wrong with the system, and we need a major course change, for which we have to mobilize. Mossi and I have been working for years to create a joint Jewish-Arab list to create a new framework. Meretz is, of course, a mixed party, but what I propose can’t happen in Meretz itself.

Einat: So where, indeed, is the red line when it comes to matters Meretz opposes: the racist citizenship law, the outposts, the settler violence?

Mossi: I ask myself this question every day. Right now, I do think it is better for us to be in the coalition, but I am not sure. I may continue to think like that, or I may change my mind next week depending on what happens on the ground.

Naomi: I’ve been inside and I’ve been outside. I’ve seen the value of trying to influence via civil society and via the Knesset, from inside the establishment and from outside, and from the academy. Each one has its advantages and disadvantages. What I think Mossi is saying in his humble way, and what I’m trying to convey as well, is very simple, and at the same time very profound. That is, we can’t continue to live in the environment that is not of our own making; we have to alter it. We have to use every tool we have –inside and outside the government—to alter the current reality.

Karen: Thank you Einat, and thank you Mossi and Naomi for this important discussion.