During our visit in Hebron we encountered a fascinating sign. On one of the walls of the Avraham Avinu neighborhood in the midst of Palestinian Hebron, under a mighty light, we read:

These buildings were constructed on land purchased by the Hebron Jewish community in 1807. This land was stolen by Arabs following the murder of 67 Hebron Jews in 1929. We demand justice, return our property to us!

Our guide, Avner Gvaryahu of Breaking the Silence (Shovrim Shtika), explained that the land had indeed been purchased by the Jewish community in 1807 and abandoned after the Hebron massacre of 1929. However, when we speak of land ownership, we tend to refer to individual and not ethnic ownership. Had I, for example, made a claim to the land of my late neighbor simply because he had been Jewish, my claim would most likely be rejected. My neighbor’s land belongs to his descendants, not to the Jewish collective. 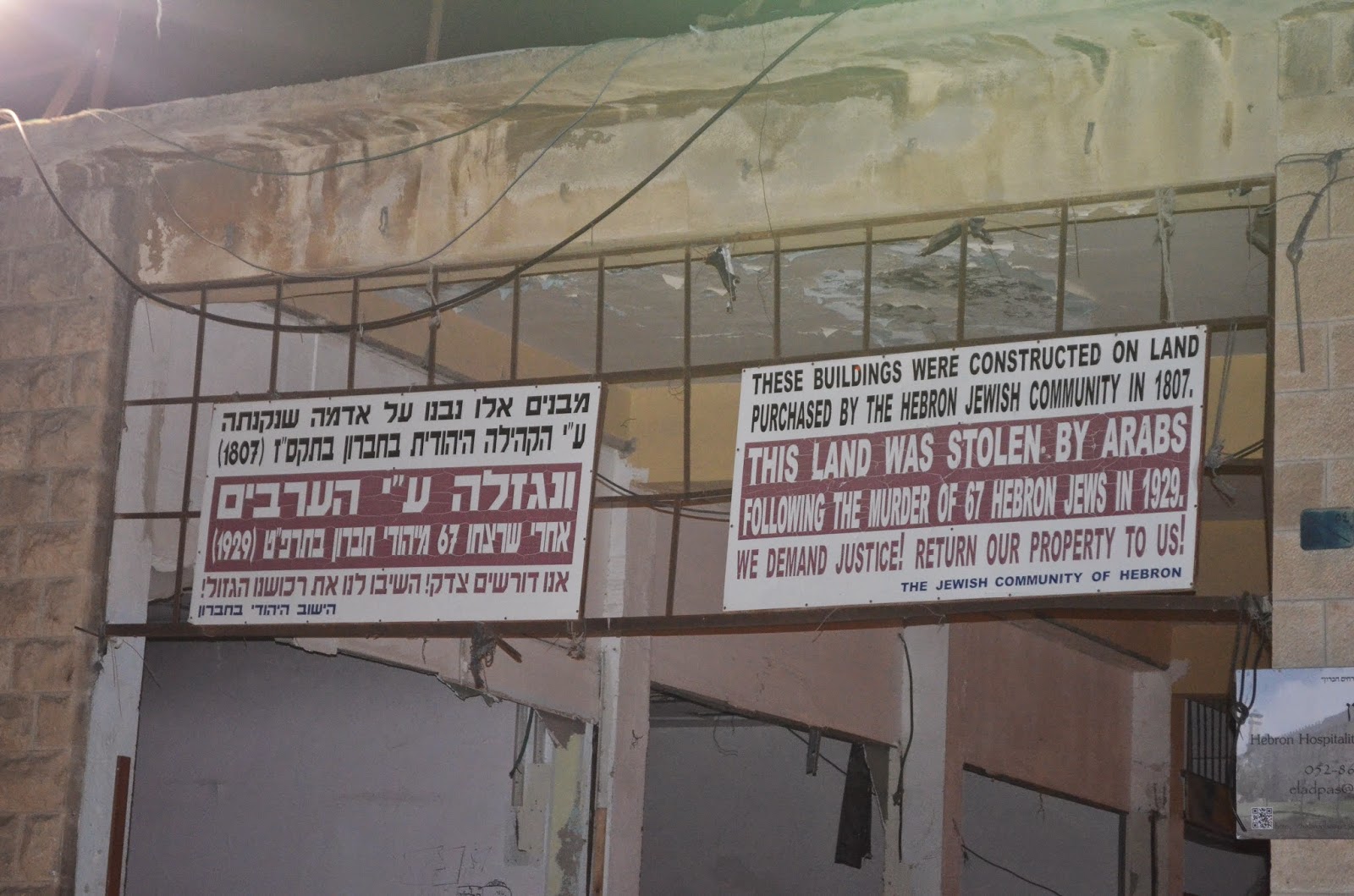 But the land bordering the Avraham Avinu neighborhood has a peculiar status. It is legally owned by Haim Hanegbi, one of the founders of Matzpen, a revolutionary socialist and anti-Zionist organization. Hanegbi inherited the land from his grandfather, Rabbi Haim Bajayo, the Sephardi rabbi of the Jewish community in Hebron. Hanegbi, needless to say, opposes the Jewish settlement in Hebron. He does not want his grandfather’s land back and most certainly does not want to give it to Hebron’s settlers.

In fact, Hanegbi even wrote a letter to the Israeli authorities arguing that he has the legal right to decide the future of his grandfather’s property.  But his position meant little to the authorities. Thus, the legal claim of the Jewish community in Hebron is of a particular type. It follows an ethno-religious rationality, which might emotionally appeal to some, but lacks legal ground. When they write “return our property to us!” the Jews of Hebron speak in the name of a Jewish collective which includes Hanegbi, despite Hanegbi’s best judgement.

There is a handful of examples like the property of the Jewish community in Hebron. We had the occasion to visit two others: Sheikh Jarrah in East Jerusalem and Gush Etzion. Both Jewish communities prospered until 1948, and were either attacked by Palestinian fighters or the Jordanian Legion, or fled during the war. In both a group of settlers claimed collective Jewish ownership over the land and forcefully settled on it. But while the struggle over Gush Etzion ended with a settler victory years ago, the fight over Sheikh Jarrah is ongoing.

These particular battles shed fascinating light on a peculiar ideological phenomenon. The settlers who argue for their ethnic right to return to Jewish property pre-1948 suffer from a logical failure, for if we allow the return to Gush Etzion, Sheikh Jarrah and Hebron, wouldn’t it be only equally just to give the same right to Palestinians who fled from the upscale neighborhood of Talbiya in Central Jerusalem, which currently houses the Israeli president? They too owned land before 1948.

Davidi Perl, the head of the Gush Etzion settlement, argued that this logic does not apply. They started the war, he told us, and by starting the war they relinquish their rights to it. We (the Jewish community of Mandatory Palestine) were willing to accept the United Nations Partition Plan for Palestine in 1947. Therefore, since the refugee problem is “their fault,” all the gains from the war of independence are ours.