A few years ago, I spent a summer in Moscow and received a special warning from the U.S. Embassy before Paratrooper Day. It briefly explained the meaning of the celebration, and then went on to say that “although the majority of these gatherings are jovial and peaceful, in recent years there have been incidents of violence, instigated by ultranationalists and directed against foreigners … We wish to remind U.S. citizens that even demonstrations intended to be peaceful can turn confrontational and possibly escalate into violence. U.S. citizens are therefore urged to avoid the areas of demonstrations if possible, and to exercise caution if within the vicinity of any demonstrations.” Happy Paratrooper Day!

Next Sunday, May 17, Russia’s Paratrooper Day is coming to Jerusalem. We call it Jerusalem Day. It celebrates the reunification of Jerusalem following the Six Day War in 1967 and much like in Russia, it originates in the victory of paratroopers (who conquered Jerusalem) and the years have turned it into an occasion for ultranationalists to wreak havoc.

Every year since 1974, as the Israeli Ministry of Tourism informs us, “Many members of the religious Zionist community come to Jerusalem on this day and hold the flag dance (Rikudgalim) procession which leaves the Sacher park near the Knesset to the Kotel (the Western Wall).” The Ministry of Tourism’s official site fails to mention that the procession enters the Old City via the Muslim Quarter and rampages through the streets chanting “slaughter the Arabs” (and in Arabic in case the local population fails to understand — itbah el Arab), “Muhamad is dead” and “death to leftists.”

No one seems to mention the fact that this racist procession is in part funded by Israeli taxpayers. The Ministry of Education, for example, buses students from all over the country to this educational celebration of hatred, and the police protects the violent dancers as they destroy Palestinian property and attack people on the street.

Video footage collected in recent years shows that the Israeli police and border patrol use a method they call “cleansing” the alleys of the Muslim Quarter of its Palestinian inhabitants and merchants. They make the Quarter “sterile” for the Jewish procession by closing entrances to homes and preventing inhabitants entering or exiting buildings. In one clip a border patrolman taunts a merchant in front of his closed store: “I want to see how big are your balls, that you would open the store.”

Tamar Pileggi and Elhanan Miller report for Time of Israel:

“You cannot leave the house at all that day, because last year, when Palestinians walked outside they were beaten up brutally. It’s just really scary,” one resident of the Muslim Quarter was quoted as saying in the petition. Another Muslim Quarter store owner — who closes his business during the holiday — said that crowds vandalize and damage the property of local homes and businesses.

This year a coalition of activists and NGOs petitioned the High Court of Justice to change the route of the annual Jerusalem Day march, so that it does not pass through the Muslim Quarter of the Old City. Attorney Eitay Mack wrote in the petition that the march’s organizers and police do not have a legal basis to require residents and merchants to barricade themselves inside their homes until the storm has passed.” 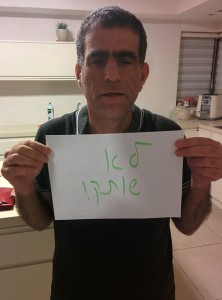 Mossi Raz holding a sign: Not remaining silent [in the face of racism]

But on May 11, the High Court rejected the petition “with a heavy heart,” while calling upon the police to adopt a “zero-tolerance policy for the ‘Death to Arabs’ chant that includes arrests and indictments,” and added that those who wish to chant the slogan could do so from behind bars. Like the police, the High Court argues that the procession is a matter of “freedom of speech,” but Justice Elyakim Rubinstein observed of the attendant racist slogans that “this is not freedom of speech, this is freedom to incite.” Still, it is a strange defense of freedom of speech when protecting it comes at the price of Palestinian freedom of movement.

Perhaps what bothers me most about the celebration of hatred is that it is done with the full endorsement of the state. While kids in Tel Aviv will sing “Jerusalem of Gold” in their school auditoriums, other kids are taught that it is legitimate and acceptable to terrorize the Palestinian population of Jerusalem and demonstrate to them that our victory was their loss.

Yet, with the exception of the Times of Israel and the ultranationalist Arutz Sheva, one can find little about this insanity in the English-language press. The racists are out, and we are silent.