This coming national election, Oct. 19, is a neck & neck & neck three-way race among the incumbent Conservatives, the New Democratic Party (NDP), and the Liberals.  The NDP is a democratic socialist party in the mold of Western European social democracy, that emerged in 2011 from decades as a distant third force (with a modest number of Members of Parliament and occasional victories in the provinces) to substantially overtake the Liberals for second place to Prime Minister Stephen Harper’s Conservatives.  Polls show the NDP with a very slight lead, but the Liberals have surged back from near-oblivion under the leadership of Justin Trudeau (son of the late Liberal PM and JFK-like celeb Pierre Elliot Trudeau); it really is anybody’s ball game.

I studied in Montreal in the 1970s and actually campaigned for an NDP candidate there. I’m disappointed that the NDP and Liberals didn’t make a strategic agreement that would have guaranteed a Conservative defeat: in all ridings (parliamentary districts) where a Conservative won with only a plurality over Liberal and NDP candidates, they could have chosen one opposition candidate, depending on which party had more votes last time.

When I was in Montreal, the NDP’s national leader was David Lewis, an avuncular Jew with slightly Bundist leanings.  He supported Israel’s right to security, while also expressing sympathy for Palestinian rights as integral to a peaceful resolution.  His son, Stephen Lewis, led the NDP in Ontario in the 1970s, and has since taken career turns as a broadaster and diplomat. 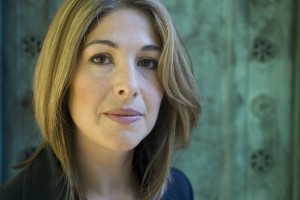 David’s grandson, Avi, is married to Naomi Klein, the well-known radical activist and writer. Klein is somewhat simplistic in her uncharitable view of Israel, contending that Israeli security-related business interests are what has caused Israel’s move to the right in recent years — in line with her Shock Doctrine best-seller theory of “Disaster Capitalism,” and ignoring that pesky little matter of the Second Intifada.

But what brings me to this subject of Canada now is journalist Lisa Goldman’s Facebook post (she’s originally from Toronto) about an article in a Canadian cultural publication called The Walrus:

The Jewish issue adds relish to an already exciting election campaign.  Prime Minister Harper has been outspoken in supporting Netanyahu’s policies (they are pictured together in this posts’s featured image).  My reactions to this discussion: