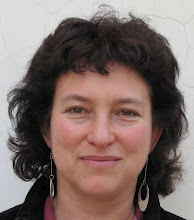 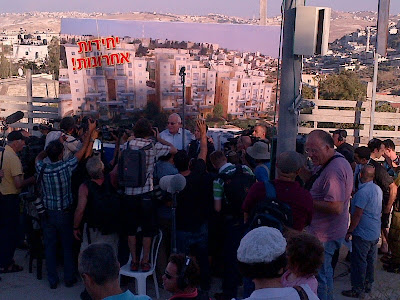 Yesterday I participated in a protest at a ceremony for laying a “cornerstone” of a new building project — an Israeli project, at the edge of the (East Jerusalem) neighborhood of Jabr Mukaber. It was a bizarre event, to say the least.

First of all, it was hardly possible to lay a cornerstone. The project began 5 years ago and was halted 2 years ago, after two stories of the project had already been built. The great celebration was that the minister of building, Uri Ariel, managed to extricate approval from Bibi Netanyahu and his governement to renew work on the project.

Second, the buzz in Jerusalem is that the approval is meant to compensate rightist components of the government for the decision to release a number of Palestinian terrorists from Israel prisons. That to me is a gruesome idea: I can hardly imagine that any family of any victim of a terrorist attack would find solace in that dreadful building project on the outskirts of the capital.

Third, Ariel’s performance was a pitiful and transparent attempt to disrupt the peace talks due to begin this week. He and the other guests of honor spoke to the meager crowd (outnumbered by journalists and protesters) about his plans to build everywhere “between the river and the sea”, i.e., completely disregarding the government’s supposed commitment to a two-state agreement.

Finally, the mayor of Jerusalem insisted on speaking about the building “for Jews,” even arguing with me that my opposition was racist — that according to him, he had a responsibility to build for Jews and Arabs alike.  This project, clearly, was meant for Jews. Here he not only missed the crux of the protest but showed how caught up he was in creating a religious crisis out of one over territory.  The problem with the building project is not that it is being built “for Jews” in an “Arab neighborhood.” The problem is that Israel, as the occupying power in the West Bank and East Jerusalem, is forbidden by international law to settle its citizens in the conquered territory.

It makes no difference if the tenants are Jews, Muslims, Christians, or Bahais.  If they are Israelis, they should not be settling in Palestinian territory.