Over the weekend, I met two Palestinian activists in the partnership of Israeli and Palestinian veterans of the conflict known as Combatants for Peace (CfP).  My friend, the journalist Doug Chandler, invited me to join him at a Manhattan diner with Mohammad Owedah and Sulaiman Khatib, who are touring for a few weeks on behalf of CfP.  They gave us a fascinating picture of themselves, their organization, and the current situation. 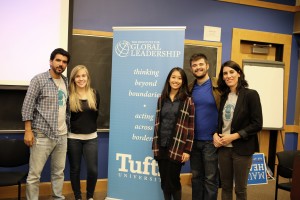 Sulaiman Khatib at left with colleague Maya Katz at opposite right corner.

The two activists admit that there are disagreements within their group over the ultimate solution, but all are absolutely dedicated to non-violence.  Owedah says he is firmly committed to two states, while Khatib prefers one bi-national state.  At the same time, both gentlemen fully accept the Jewish connection to the land.

Khatib explained how moved he was when he visited the Anne Frank House in Amsterdam and read a quote on a wall panel that convinced him that Jews are legitimately a distinct people; what I believe to be the actual quote expressed Jewish pride, but was not necessarily nationalistic (it’s included in a footnote*).  Khatib came to this realization after serving ten years in an Israeli prison for a knife attack on Israeli soldiers when he was 14 years old.  (Released from prison at 25, he is now 43.)

Regading the current outbreak of violence, Owedah — a native of the Silwan neighborhood of East Jersualem where he still resides and works as a social worker — said that it’s mostly the result of young people in East Jerusalem feeling acutely oppressed and directionless because they have no real economic opportunities, and their energies are not being channeled constructively by adequate educational and recreational outlets.  Disagreeing somewhat with Khatib, he does not see it as an expression of nationalism — otherwise, contends Owedah, there would be more violence in the West Bank than there is.

Unfortunately, we did not get to meet their Israeli colleague, Maya Katz, also touring for CfP.  Ms. Katz is a clinical psychologist who was raised on Kibbutz Gesher and now lives in Tel Aviv.

Owedah and Khatib mentioned that in their appearance at a synagogue during this tour, their audience was intensely interested in their opinion of BDS.  They oppose boycotting Israel within the Green Line, but support a targeted economic boycott of the settlements (as advocated by PPI and Peter Beinart).

A University of Massachusetts/Amherst webpage describes Combatants for Peace as follows:

. . .  founded in 2006, [CfP] is a non-profit, volunteer organization of ex-combatant Israelis and Palestinians, men and women, who have laid down their weapons and rejected all means of violence. Their mission is to build the social infrastructure necessary for ending the conflict and the occupation.

They work together toward this goal of bringing justice and peace to the land, demonstrating that there is a real alternative to the cycle of violence and that Palestinians and Israelis can work and live together. They believe that disseminating such activities widely can and will affect attitudinal change at the societal level and policy change at the political level.

*This is the full Anne Frank quote that captivated Sulaiman Khatib: “Who has inflicted this upon us? Who has made us Jews different from all other people? Who has allowed us to suffer so terribly up till now? It is God that has made us as we are, but it will be God, too, who will raise us up again. If we bear all this suffering and if there are still Jews left, when it is over, then Jews, instead of being doomed, will be held up as an example. Who knows, it might even be our religion from which the world and all peoples learn good, and for that reason and that reason alone do we have to suffer now. We can never become just Netherlanders, or just English, or representatives of any country for that matter; we will always remain Jews, but we want to, too.”