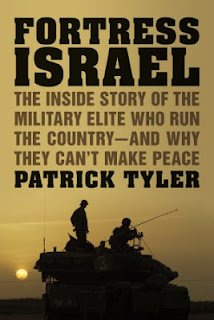 I’ve recently seen a broadcast on C-Span of the New America Foundation hosting journalist Patrick Tyler on his new book, “Fortress Israel.”  Although I haven’t read it yet, I’m convinced from seeing the broadcast that Tyler has no sinister anti-Israel agenda in mind; but his analysis seems woefully ill-informed and inadequate.

Thomas Mitchell’s review, published here, reveals a flaw in the author’s vision: Tyler provides the Arab side with no real agency or responsibility in the ongoing conflict.  He focuses on the ancient rivalry between Moshe Sharett and David Ben-Gurion back in the 1950s, rather than on the more recent history of the Oslo peace process of the 1990s and the Intifada and post-Intifada years of the past decade.

Sharett was Israel’s first foreign minister (1948-56) and second prime minister (1953-55) until, according to the author, he was undermined by Ben-Gurion favoring a more aggressive and militaristic posture toward the Arab world.  Yet Tyler does not account for Ben-Gurion’s very dovish stance after the 1967 Six Day War when he advised a quick return of the territories taken by Israel in that war.  Nor does Tyler explain Ben-Gurion’s decision to go for an armistice at the end of the ’48 war, rather than to reconquer the Old City of Jerusalem and parts of the West Bank, at a time when the tide of war had completely shifted in Israel’s favor.

Without an emphasis upon the 1990s and the 2000s, Tyler misses the interactive dynamic of the conflict: how a mix of terrorism emanating from the Palestinian side and of territorial expansionism on the Jewish side have together undermined promising openings toward peace.  He also postulates the existence of a caste of elite military officers and intelligence-security agency professionals who shape Israeli policy with a monolithic militaristic viewpoint.

If this were true, how would he account for the emergence of Yitzhak Rabin in the early 1990s?  And how to explain Ariel Sharon breaking with his own Likud and the militant settler movement that he had previously championed?  Or the more dovish recent incarnation of Shaul Mofaz, a former army chief of staff, who now heads the Kadima party?  Or of the pushback to aggressive military action against Iran from most serving and retired officers of the military high command and officials of the intelligence establishment?