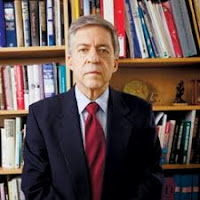 Yossi Beilin — an architect of the Oslo agreements as Israel’s deputy foreign minister, an ex-minister of justice under Barak, and a former head of Meretz — has changed his mind on the question of a Palestinian recognition of Israel as the Jewish homeland.  Now he favors it, along with a formula that reduces the number of Israeli settlers to live within the new Palestinian state, and sets a ceiling on the number of Palestinians “returning” to Israel.  The following is from his NY Times op-ed, “Saving Kerry’s Peace Plan“:

. . .  Until recently, I was among those trying to convince Israeli decision makers to give up on the demand that Palestinians recognize Israel as a Jewish state, both because Israel has been and will continue to be a Jewish state without Palestinian recognition, and because Israel never made such demands when signing peace treaties with other neighbors, like Egypt and Jordan.
I’ve changed my mind.  . . .

. . .  Both sides should embrace the formula proposed 10 years ago by the Geneva Initiative, which recognized the right of both parties to statehood and “Palestine and Israel as the homelands of their respective peoples.” If Palestinians accept this formulation, then Israel would have to agree to absorb a limited number of Palestinians and allow those Israeli settlers who wish to stay in the West Bank to live under a sovereign Palestinian state . . .
But first the Israeli government needs an incentive to convince as many settlers as possible to leave the future Palestinian state, and will allow some Palestinians to live in Israel.
Here’s how it could be achieved. Five years after the signing of an Israeli-Palestinian peace agreement, all settlers remaining in the newly established Palestinian state would be counted, and the resulting number would set the quota for the number of Palestinian citizens admitted for permanent residency in Israel.
. . .