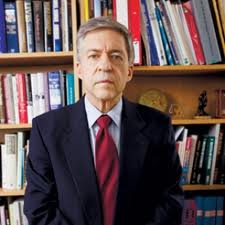 Yossi Beilin, leader of the Meretz party from 2003 to 2008, was a protege of Shimon Peres and a prime-mover of the Oslo peace process during the Rabin-Peres government of 1992-’96.  I recall, in particular, a news photo of a still youthful-looking Beilin on a diplomatic mission to Oman or some other moderate Arab state in the Persian Gulf region, making significant progress in getting Israel integrated into the Middle East.

Before things went very wrong for reasons beyond his control, Beilin was forging the path toward the “New Middle East,” a phrase coined by Peres that, sadly, became vulnerable to ridicule.  One other promising Beilin effort that tragically came to naught was his potential ground-breaking agreement in principle with Mahmoud Abbas, on the eve of Yitzhak Rabin’s assassination. My understanding is that this included the concept that the thickly-populated settlement blocs near Jerusalem and Tel Aviv could be retained by Israel if the new Palestinian state-to-be is compensated with Israeli territory in exchange.

The following is a summary, from last Friday’s daily J St. News Roundup, of Beilin’s article at the website of Foreign Policy magazine, “Dear Abu Mazen: End This Farce”:

Yossi Beilin has an open letter in Foreign Policy to President Abbas, urging him to dismantle the Palestinian Authority; he writes, “Please don’t let this be the way you end your political mission — a mission that seeks to achieve Palestinian independence without the use of violence.
Do not hesitate for a moment! Do not accept the request of President Obama, who merely wants to be left undisturbed before election day. Do not let Prime Minister Netanyahu hide behind the fig leaf of the Palestinian Authority — impose upon him, once again, the responsibility for the fate of 4 million Palestinians. Remain as the head of the Palestine Liberation Organization, which will give you the authority to lead the political negotiations if and when they resume. But for the sake of your own people, and for the sake of peace, you cannot let this farce continue. …”

Beilin makes some very good points, especially about how Oslo didn’t fail but rather was “thwarted” and now is a fig leaf for continuing the status quo.  But Beilin does not address the violence from extremists on both sides which marred the process and propelled the narrow electoral victory of an anti-Oslo government in Israel in ’96, instead of concluding the process under Rabin or Peres. Then, an Oslo skeptic, Ehud Barak, picked up the ball and dropped it in attempting a final deal with Arafat, a guy who had his own terrible flaws.

Other efforts at peace, this time from the right in the form of Ariel Sharon’s “Disengagement” from Gaza and his split with Likud to form the centrist Kadima, have also failed. In retrospect, perhaps Beilin was wrong to enable Sharon’s unilateral withdrawal from Gaza with Meretz votes in the Knesset, even as he criticized Sharon for not involving the moderate leadership of the Palestinian Authority.

Now, with this open letter, Beilin fails to address how the vacuum is filled if the PA folds. One comment at the ForeignPolicy.com site makes the point that Israel can refuse to take over in Ramallah; what if Israel defers to Jordan–or possibly the UN or NATO (maybe not such bad ideas)?  In fact, Beilin would be more constructive if he suggested some sort of international trusteeship over the Palestinian territories.   Secondly, precipitating a crisis during a US election year can only help the Republicans, who make Pres. Obama (for all his faults) seem like a dedicated peace activist in comparison.