Barta’a Over the Years: A Meditation

Barta’a Over the Years: A Meditation

The Wadi Ara village of Barta’a is less than a five-minute drive from Route 65, one of the busiest roads in Israel. I first visited it in the mid-1980s when the off-the-beaten-track village, tucked away in the corner of a valley and hugging the lower slopes of the Amir mountain range, was a fine example of a more than sleepy hamlet.

Three decades, a few wars, and two intifadas later, practically nothing has remained the same.

Involved in Givat Haviva’s efforts to build up a department offering seminars in different languages to kibbutz volunteers and groups from abroad on the ‘Middle East Conflict’, I visited Barta’a and many other large and small Wadi Ara and West Bank Palestinian villages and Jewish settlements in my quest to find interesting people, places, relationships, and physical vantage points to incorporate in seminars and tours.

As a journalist I was also hoping to find relevant ‘items’ to write about. On that score and many others it has been and will surely continue to be an overwhelming experience.

Wadi Ara is also known as the Little Triangle, with vertices at Umm-el-Fahm, straddling one side of Route 65; Kafr Kara on the other side of the highway; and further inland the third point, Baka al-Gharbiya. In the late 1980s, Makor, the Givat Haviva department set up for the planned seminars, worked out of a little wooden hut hugging the periphery fence of the sprawling Wadi Ara campus. At that time, Barta’a was roughly a quarter the size of what one finds today. and boasted just a couple of shops, a few mosques, and a very quiet atmosphere during the day, as most men left the village to work out of the area.

Since that time, Makor has become the Givat Haviva International Department. Offices and classrooms were constructed, innovative programs were devised attracting thousands of youths, students, and adults annually from overseas to seminars dealing with Arab-Jewish relations in Israel – and having them meet with the region’s Arab and Jewish residents on guided tours.

Since 1967 and the Six Day War the Green Line as a ‘border’ has somewhat been erased, but not really. After the war Barta’a residents were free to visit with each other and with their extended family living deeper inside the West Bank or Israel. However, much more turbulent water has flowed down the wadi since then. And in December 1987, the Kabha clan members once more found themselves in the eye of the storm with the outbreak of the First Intifada.

Palestinian East Barta’a participated in the uprising while their West Barta’a relatives holding Israeli citizenship were caught in the middle. They were emotionally torn bystanders as Israeli soldiers fought with members of their immediate family on the other side of the rubbish-filled ditch running through the middle of the village, a not-so-green line and former border between, as the local population phrase it, “over here and over there.”

It is the same expression used whichever side of the line one might be standing, as is another oft-heard phrase, “us and them.” If you are “over here” then “they” are “over there.”

The 1993 Oslo Accords brought new hope for the Palestinian people to run their own lives. East Barta’a ended up becoming a ‘B’ area, with the new Palestinian Authority responsible for infrastructure but Israel maintaining the final say regarding security.

Through the 1990s, as areas changed from ‘C’ (under full Israeli control) to ‘B’, and with the large majority of Palestinians already living in autonomous ‘A’ areas, Israel was struck by a wave of horrific terrorism, followed by closures slapped on the West Bank – particularly around the autonomous areas – for long periods of time.

The government decided to build a security fence, supported by the majority of Israelis. By the beginning of 2008 the security fence was completed from the border with Jordan, across the Beit Shean Valley, up and over the Gilboa Mountain range, across the Jezreel Valley and then ascends the Amir Mountain range to Umm-el-Fahm, more or less on the Green Line all the way.

At Umm-el-Fahm the security fence suddenly veers off the Green Line course and cuts a few kms in to the West Bank, passing behind a bloc of four Jewish settlements.

Back to East Barta’a, now Area ‘B’ – with the security fence 3 km to the East, the “Israeli side.”

With the realization that customers from Israel, Arab and Jew alike, would no longer drive in to the West Bank to do their shopping – considerably cheaper than in Israel – Palestinian shopkeepers, businessmen of all descriptions, as well as laborers no longer allowed across the Green Line, began to move to sites as close as possible to the former border. In Barta’a they not only encamped on the east side of the divide, but also placed shipping containers as makeshift ‘shops’ across the ditch.

Now East Barta’a has become a honky-tonk boomtown, boasting over 600 businesses and thriving industrial concerns. Here, on either side of the divide but mostly in the eastern portion, Palestinians manufacture garments, bed linen, and other items for export and a multitude of imported merchandise is for sale to the bargain hunters who still arrive. Most are Arab citizens of Israel but lately a good number of Jewish Israelis also show up.

The majority of workers in East Barta’a’s sweatshop factories of the new millennium are women from Palestinian West Bank villages such as Yabed, on the other side of the security fence. The cutters, machinists, and packers have permission to pass through the Reichan checkpoint behind Barta’a on a daily basis to work in Area B – but not to cross over the Green Line.

Hundreds of men take the same route daily, clutching the documents allowing them to work in the land squeezed between the Green Line and Israeli side of the fence, which I call ‘Limboland’ – neither here nor there, where one can find both Jewish settlements and Palestinians in small villages living side by side.

Considerable numbers of Palestinian men also have permission to work over the Green Line and cross daily to labor in agriculture or construction in Israeli towns and villages. They arrive back at the checkpoint in the afternoon carrying sacks of oranges or grapefruits as they amble through a mesh tunnel leading to those who physically check their papers, personage, and packages.

Some of the Palestinians who pass through the checkpoint actually have Israeli citizenship, as they are married to Israeli Arab women from villages in the Wadi Ara area – particularly Barta’a. The majority cannot pass through the checkpoint in their own vehicles, thus leading to lines of waiting taxis on the ‘Limboland’ (western) side of the facility. Some are official Palestinian green-plated yellow taxis but the majority are private cars with white Palestinian plates, or yellow Israeli plates if the driver married an Israeli citizen. They all charge 5 shekels a head for the five-minute commute to or from East Barta’a. When you are only being paid 10 shekels an hour in East Barta’a, that’s quite a hefty sum of money – 10 shekels a day, or one hour’s work. Then many take another taxi from the other side to Jenin – another 10-15 shekels each way.

Barta’a has become the Dizengoff Center of Wadi Ara, attracting not only a large number of shoppers from among the 300,000 Arab citizens of Israel living in the Triangle (Umm al-Fahm to Taibe), but almost daily one also sees Druze from Haifa and the Galilee busily snapping up goods or eating in the local restaurants.

What started as my quest to gain more knowledge and build up a relationship with the people of the Wadi Ara region – down the road from my kibbutz abode, and a few minutes from Givat Haviva, where I work– has become an almost 30 year experience in what seems to be a never-ending story. 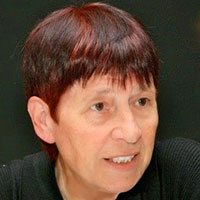 Lydia Aisenberg is an Israel-based educator and study tour guide and a journalist.