At a Checkpoint during Ramadan & Tisha B’Av

At a Checkpoint during Ramadan & Tisha B’Av 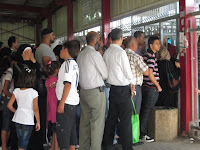 This is from an Israeli friend who participates in “Machson Watch” – Checkpoint Watch… and was there today for Tisha B’Av… (for more about them check out their website):

We have heard much about the alleviations for Palestinians in Ramadan. At first glance at Qalandiya it seems as this is so. The line in the shed is not long and goes through to the windows very quickly and all five are open. But this is an illusion. 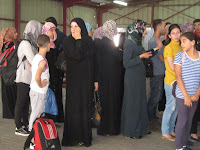 We arrived at about 4 and it looks good but towards 17:00 this changed . One  window was closed and only four were open. At this time many more people started arriving including young women with children. P—– phoned and asked if the 5th window could be opened and also the humanitarian gate for window and children. This was not done.  We had to leave at 5:15 having had a puncture which the taxi drivers helped us with and received a generous remuneration but wanted to be sure that the wheel was in its place. 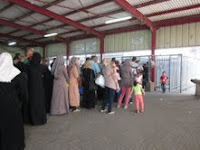 If you look at the pictures you can see the people who were still waiting to pass through the shed when we had to leave. At least over 100. One has to ask …how many Israelis with their children would stand there in such silence. “The silence of the lambs” And this after day of not eating or drinking and in some cases also working. The time has come for those Israelis fasting today Tisha Ba’av, to make their own accounting.  But they won’t. 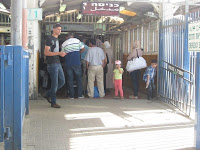 We met two young women who had American passports and had gone through the car passage with their husbands that of the four, three of them were allowed through but the third one made the mistake of showing that she also had a permit. So she was sent to go through the pedestrian passage. Reminds you of something? The lack of logic, common sense and just plain decency which seem to be part of the characteristics of our soldiers today…for example the poor terrified little five year old.

Dafka, the one who was NOT let through was a young Palestinian woman from Michigan who works at the university with a group of Arabs and Jews to help understanding. She and her friend waited for 40 minutes in the shed before going through to the windows. We do not know how long they waited there.  Who needs propaganda. You just need soldiers who know how to act as simple human beings. Why waste money on propaganda when at least with decent behavior we can send a message to those who criticize us?