Whenever a liberal pro-Israel commentator speaks or writes on Israel’s shortcomings, s/he’s aware of stepping into a minefield.  I was reminded of this when watching The Forward columnist Jay Michaelson debate a right-wing guest on Rabbi Mark Golub’s Shalom TV discussion program, L’Chayim.  The conservative commentator, Michael Prell, came off as so over-the-top in his pronouncements (e.g., condemning Obama’s “apology tour” of 2009, during which he made his famous Cairo speech) that eventually Rabbi Golub pressed Prell to respond directly to Michaelson’s demand for more specifics.

In general, Rabbi Golub attempts to maintain a centrist perspective, but he is so protective of Israel’s image that he tends to accept many right-wing talking points regarding the history of Israel’s conflict with the Arab world and the extent of the Jihadist threat emanating from the Muslim world. I don’t doubt that there is a “Jihadist” threat, but US diplomacy could make it far worse if it tars most Muslims with the same brush as Islamist extremists, or even if it defines all Islamists (such as the Egyptian Muslim Brotherhood or Hamas) as global Jihadists.  As Michaelson indicated, as bad as Hamas is, it is a religious nationalist movement, not one that fights for the establishment of a new Caliphate and the worldwide hegemony of Islam.

Yet Michaelson was overly concerned to disavow a “moral equivalency” between Israel’s cause and that of the Palestinians.  As national causes, I do see them as roughly equivalent in their legitimacy.  I happen to have more insight into and sympathy for the Israeli side — because it’s “my side” — but I don’t want to engage in wholesale condemnations of either side.  They each have legitimacy in their own terms and each side has done things at various times that I see as either morally or politically wrong.  In the words of writer and peace advocate Amos Oz, this conflict is not about right versus wrong, but right versus right.

In this broadcast, I was surprised to see that Michaelson was not sufficiently informed to make Gershon Baskin’s point that Israel might have achieved a long-term truce with Hamas, without this latest war, if it had not chosen to kill Jibari, the Hamas military commander who had negotiated in good faith to have Gilad Shalit released unharmed and who, according to Baskin, had just received the draft of a truce agreement with Israel when he was hit by a drone.

I happen to see both Israelis and Palestinians as moral (or immoral) agents of the conflict that stumble from mistake to crime to mistake, as they tragically miss opportunities to build a better, more peaceful future.  The launching of the blood-soaked Second Intifada was one such instance, which might perhaps have been avoided if Ehud Barak had been a more astute political leader or a better negotiator.  The elevation of Hamas to rule in Gaza (first via a narrow electoral victory and then by a violent coup) was another such misfortune, which might have been avoided if Ariel Sharon’s “Disengagement” from Gaza had been coordinated with the Palestinian Authority as urged by the leader of Meretz at the time, Yossi Beilin.  And then the first Gaza war of 2008/09 undermined a negotiating process that was quietly in the offing via two years of serious discussions between Mahmoud Abbas and Ehud Olmert. 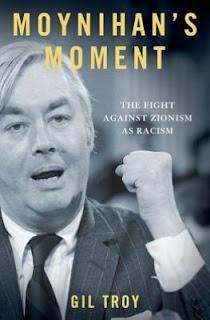 These are part of an almost endless cycle of events in which bad decisions or unfortunate events from one side lead inexorably to bad reactions from the other.  Most pro-Israel and pro-Palestinian commentators miss the interactive quality of the conflict; such is the case with Prof. Gil Troy, a McGill University historian, who attempts to inhabit the “perfect” moderate/centrist perspective, but — like Rabbi Golub, on whose program he’s also appeared — he leans center-right in a somewhat overly zealous defense of Israel that tends to justify a tense and unstable status quo.

I’ve just seen Prof. Troy last night at my local synagogue, speaking on his new book, “Moynihan’s Moment: The Fight of Zionism As Racism.”  His moderation comes out when he acknowledges that Israel’s expansion of settlements is not a good idea and that the withdrawal from Gaza should have been made as a “gift” to the Palestinian Authority of Abbas, rather than allowing Hamas to claim it as a victory for their violence.  But he does not acknowledge that the relative peace Netanyahu has ostensibly achieved on the West Bank is likely to be short-lived if it is not supplemented by a productive political process to move toward a two-state solution.

I did not get the chance to point out that this time resembles the period of calm and economic expansion during Netanyahu’s first term as prime minister in the late 1990s, when he did not follow-through with a full implementation of the Oslo process to end the conflict.  Pressures built among Palestinians during this time, to finally explode after Barak added to their frustrations by delaying anticipated peace efforts for another year, until he rushed headlong into Camp David in the summer of 2000, as both sides blundered toward the catastrophic explosion known as the Second Intifada.