All Economic Sanctions Are Not Equal

All Economic Sanctions Are Not Equal 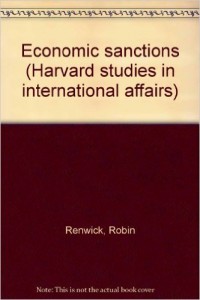 The cover of Robin Renwick’s study, published in 1981

Robin Renwick was closely involved in negotiating the transition process from Rhodesia to Zimbabwe in which international economic sanctions played a major role. Knowing that they could play a similar role regarding South Africa (where he later became the UK’s ambassador from 1987 to ’91), he took a leave of absence from the British Foreign Service to write about the historical experience of economic sanctions. He found that they were most important as a signaling device with one government or a group of governments expressing disapproval of the policy of another country without using military force. But he also found that they were most effective as an accompaniment to actual warfare.

There are two major dimensions to economic sanctions: breadth and depth. Breadth refers to how widely the measures are adopted by other governments, and depth to how deeply they affect the target economy. Are they mainly symbolic or are they substantive?

A targeted country needs only one major trading partner to escape the impact of sanctions and survive. Rhodesia, targeted by the United Nations in 1968 after the white minority government unilaterally declared independence from Britain in 1965, had such a partner in South Africa. Both Portugal and South Africa allowed Rhodesia to import oil and other needed trade goods and export its chrome, tobacco, and maize through their territories. Economic sanctions functioned as a sort of trade tax on Rhodesian manufacturers and traders by forcing them to buy goods for about ten to fifteen percent above the market price and sell their own goods at about the same rate below the global market rate. Governments dealing with Rhodesia were like fences dealing with stolen goods in the domestic sphere. Sanctions became really potent when the guerrilla war by nationalist guerrillas escalated to the point that the economy could no longer bear simultaneously the costs of war and the costs of sanctions.

South Africa in the mid-1980s faced a number of external threats and challenges: a guerrilla insurgency in occupied Namibia (under South African control in defiance of the World Court and United Nations), major riots in South Africa’s black townships, the Cuban military presence in Angola, an economic boycott of its products in Europe and a move towards sanctions. Pretoria had a very expensive infrastructure of government departments in each of the black homelands that South Africa maintained as autonomous structures within South Africa, similar to Indian reservations in the United States.

To manage its economic payments South Africa needed an influx of short-term loans from European banks. The European banks were happy to provide these loans until the widespread internal unrest from 1984 to 1988 made South Africa a bad political risk. Therefore the European banks charged higher interest rates to compensate them for the risk of default. The higher interest rates combined with the threat of increasing economic sanctions in the future, and internal unrest from the majority black population, led President F.W. de Klerk to negotiate. By withdrawing from Namibia in 1989, his predecessor had eliminated the guerrilla training camps in Angola as part of the peace settlement. In the early 1990s, the white government was at the peak of its likely military strength and decided to negotiate an end to apartheid from a position of strength rather than from weakness as Ian Smith did in neighboring Rhodesia.

Could a similar scenario develop in the Middle East to make economic pressures lead Israel to abandon its occupation of the West Bank? First of all internal Arab unrest within Israel since 1948 lasted for only about two weeks at the start of the Al-Aksa Intifada in 2000. This compares with the four years of sustained internal unrest in South Africa in the 1980s. And, unlike the Jews of Israel, the whites in South Africa lacked a geographic core territory where they were a majority.

Israel has also shifted much of the administrative costs of the occupation on to the United States and Europe through the Oslo process. Washington does not want to put its most reliable regional ally at risk at a time when the region is torn by internal violence and a Sunni-Shia Muslim religious schism.

The biggest future potential economic threat to Israel is the continued growth of an economically unproductive ultra-Orthodox sector that is dependent on government largesse through its political parties for survival. If this continues and Israel becomes economically isolated, it’s most talented economic sector—the high tech software and computer industry—could see its talent drifting away to other countries. This is what occurred in Rhodesia in the late 1970s due to the burden of ever increasing mobilization periods on the border, and in South Africa in the late 1980s, plus among the British Unionist community in Northern Ireland during the 1980s and 1990s.

Young Jews are used to migrating to where they are appreciated and can live freely. In the second half of the twentieth century this was in America and in Israel. In the twenty-first century it could be to Europe again, as well as to the Americas.