A Rosy Phantasmagorical (and Probably Counterfactual) Report from Israel’s Future

A Rosy Phantasmagorical (and Probably Counterfactual) Report from Israel’s Future

As Israel celebrated its centennial Independence Day in May 2048, its media reflected back on the many red-letter dates that had marked the tumultuous life of the nation: The UN vote of 1947, the various wars, of course, and the diplomatic agreements reached, first with Egypt and Jordan, and decades later with the rest of the Arab world. But of all the historic turning points cited, the one that stood out the most, the one that marked the sharpest divide between the dark days of before and the brighter days of after was the first half of 2020.

The country at the time was going through a period of instability, and had just experienced a bruising election campaign, its third in less than year. In an effort to stay in power, then-Prime Minister Binyamin Netanyahu, who headed the Likud party (it would break apart nine years later), made use of harsh, explicit fear-mongering which focused on the supposed threat that the 20 percent Arab minority posed to the nation. (Part of his motivation to remain in power was to avoid standing trial on several serious felony charges.)

Public expressions of racism had become rather common in Israel over the previous decades, and especially during Netanyahu’s unprecedented eleven consecutive years in power, so the pundits of the time did not foresee any momentous change on the horizon. Indeed, Netanyahu’s Israel had recently passed a quasi-constitutional “Nation-

State Law,” which gave the country’s Jews legal supremacy over their Arab compatriots in several key areas. (The legislation would be suspended in 2024 and later superseded.) 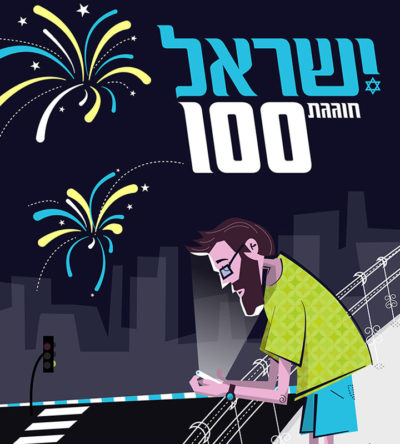 But something tectonic began to happen in March of 2020. After initial exit polls from March 2 elections indicated that Netanyahu’s bloc of rightwing and orthodox parties was on the verge of securing a small majority, the actual count showed that the exit polls had been slightly – but significantly – off: In fact, after 100 percent of the vote was counted, it turned out that Netanyahu’s bloc was in the minority, commanding only 58 out of 120 Knesset members.

Netanyahu’s response was to fall back on his go-to move: He insisted that his bloc had nonetheless won because it represented a majority of the country’s Jews. Standing next to an eraserboard at a meeting with his bloc, he jotted down the numbers: 58 seats for the “Zionist Right” versus only 47 seats for what he called the “Zionist Left.” (This was actually a misnomer as most of those opposing Netanyahu belonged to a large centrist party, “Blue and White,” with some even belonging to a right-wing, but anti-Netanyahu and ant-clericalist, party called Yisrael Beiteinu. But “Left” in Israel during that period of time was a pejorative and Netanyahu used it regularly to describe anyone who opposed him.)

But what of the other 15 seats, those won by the “Joint List” party, over 95 percent of whose votes came from Israel’s Arab citizens? “They are not part of the equation,” Netanyahu summarily declared, explaining in essence that while Israel’s Arab citizens had the right to go through the ritual of turning out and casting a ballot, the country over which he presided had no intention of allowing those votes to count in any practical sense.

In normal times, Netanyahu’s remark would have passed without much notice. The racism of that had once been the province of far-rightists, like the extremist Rabbi Meir Kahane in the 1980s, had long since oozed into the mainstream, including the ruling Likud party, and was even seeping into its centrist opposition.

But circumstances now were different. Benny Gantz, the former Chief of Staff and leader of the centrist Blue and White party, had withstood a late-campaign surge by Netanyahu, escaping by the skin of his teeth. After three elections, he realized that he was running out of time to replace Netanyahu and that a fourth election might deliver Netanyahu the majority he needed to shatter the country’s democracy. Netanyahu’s allies had already expressed a willingness to dismantle the High Court and even suspend parliament, when it served their interests.

Gantz understood that he needed to avail himself of all those who would support his premiership, even if that meant courting controversy by accepting support from the country’s Arab minority.

Meanwhile, Avigdor Lieberman’s anti-Arab Yisrael Beiteinu party, which had carved out a niche as the sole anti-Netanyahu party on Israel’s right, was facing a questionable electoral future. With an aging constituency (it appealed in large measure to first-generation immigrants who had arrived from the former Soviet Union in the early 1990s), Lieberman took note that his party had lost 50,000 votes – almost one sixth of its total – between the September 2019 and March 2020 elections. Lieberman’s strategy, in other words, which had provided such a huge electoral boost between the April and September 2019 elections, was starting to lose its luster. Another election could be his party’s undoing. Begrudgingly, he agreed to support Gantz’s Blue and White party even as it made a deal with the Joint List representatives whom he had so often demonized over the years.

Led by Ayman Odeh, the Joint List, too, swallowed hard. Lieberman was an archenemy of the Arab community, having repeatedly questioned their loyalty to the country and having conceived the idea of transferring areas with heavy Arab population into a then-still-envisaged State of Palestine. They were skeptical, too, about Gantz: While the centrist leader did not explicitly endorse racism, he seemed to tacitly accept the rightwing’s premise that, in a “Jewish state,” Arabs would necessarily be second-class citizens. Despite an understandable lack of enthusiasm, the Joint List agreed to prop up a government that would rid the country of Netanyahu, but allowed Lieberman a central seat at the table.

Weeks of tense coalition wrangling followed those March elections, during which Gantz was tempted to form a “national emergency government” with Netanyahu. But the Blue and White leader eventually made a historic shift and agreed to the previously unthinkable: To establish a government that leaned heavily on the votes of the Arab population. In return for the Joint List’s support, the newly inducted Prime Minister Gantz shocked the nation by appointing Knesset members from that faction to head key Knesset committees. A year into his government, he reached an additional deal with the Joint List to appoint one of their members to head a Cabinet Ministry dedicated to economic equality.

While Israel’s still-powerful rightwing howled, online and in the streets, and although the threat of civil war hung over the country for months, the majority of Israelis soon grasped that the unthinkable was now thinkable – and that life went on as before. As the chair of the left-of-center Meretz party (a forerunner of the Democracy for All party) predicted early in the process, once cooperation with Arab Knesset members got underway, more and more of Israel’s Jewish citizens realized that “the sky wasn’t falling” and that the Israeli right’s scare tactics had been baseless: Israel was exposed to no enemy attack; internally, its society held firm. In fact, tensions between the country’s Jewish majority and its Arab minority gradually began to ease, a process that would continue over the next decade, paving the way for the long-awaited Israeli constitution of 2033 that guaranteed equality for all citizens.

But politics was only one part of what catalyzed Israel’s democratization process in the years after 2020; tragically, it took a major catastrophe as well – a pandemic that was known in Israel as the Corona Plague. Originating in China, the highly infectious virus quickly spread around the globe, including to Israel, where it overwhelmed a health system that had not been properly prepared for a pandemic.

But rather than produce heightened tensions between Israel’s Jews and Arabs, something unexpected occurred: Israelis saw that the virus didn’t discriminate on the basis of ethnicity or religion; it took lives in all communities. Israel’s Jewish citizens noticed something else: When they or their loved ones went to the hospital, the medical staff fighting to save their lives didn’t discriminate either. With Arab citizens making up one-fifth of all doctors, one-quarter of all nurses, and one-half of all pharmacists, Jewish Israelis began to see their compatriots in a different light.

By the time the next elections were held, in 2023, the Corona Plague was gone and the atmosphere in the country had changed. As Israel began to emerge from its darkest era of racist incitement, Likud’s old rallying cries grew less effective. And without its charismatic long-term leader, who was convicted of bribery, fraud and breach of trust (but avoided jail time in a plea bargain), the party lost tens of thousands of supporters to Blue and White. Meanwhile, the religious parties that had once been Netanyahu’s solid allies saw the handwriting on the wall and made deals with Prime Minister Gantz in the second of his three terms.

Israel still faced years of turbulence, and change did not come easily or all at once. But in the first half of 2020 it turned a corner. It had survived – barely – the Netanyahu years.

Ron Skolnik is an American-Israeli political columnist and public speaker, whose articles have appeared in a variety of publications, including Haaretz, Al-Monitor, Tikkun, and the Palestine-Israel Journal.