I would like to share with you some insights about the work my colleagues and I are doing as the Meretz representatives in the World Zionist Organization.

The role we at Meretz play in the WZO is based on our representation in the Zionist Congress, the main Zionist institution in which world unions of Israeli parties, as well as major Jewish denominations and organizations are represented (e.g. the Reform and Conservative movements). The number of delegates each party has is based both on its relative power in the Knesset and the number of votes it receives in the Jewish world. Elections are held every five years; the next will be in the spring of 2020. Meretz has a better representation in the Zionist Congress than it has in the Knesset thanks to you – our supporters in the US and other communities around the world.

This strong representation has entitled us to an executive position on the WZO’s board. In fact, the Zionist Enterprises Department is the only place today where Meretz holds an executive mandate. The ZED is charged with carrying out projects that make Zionism relevant in today’s world. Using social action as a means to reach its goals, the ZED is widening its vision and establishing partnerships and projects to impact Israeli reality on the ground.

Some of the traditional and existing institutions within the ZED include:

The ‘Magshimim’ Movements
The Magshimim (fulfillment) movements are responsible for the development of the future Zionist leadership in the Diaspora.

Alongside these existing Zionist institutions, I’ve initiated these projects to ad¬vance our shared values of promoting social justice, pluralism, and democracy:

Back to the Declaration of Independence
Emphasizing the democratic, humanistic, and egalitarian values on which the State of Israel is based, and seeking to strengthen these values in high-school students.

Mofet – The Social Accelerator
Social initiatives and entrepreneurs were selected that have innovative and pioneering ideas for advancing social justice, bringing the periphery closer to the centers of population, narrowing income gaps, and furtherance of tolerance, equality and democracy in Israeli society. Projects are allowed a short and intensive period of 4 months to achieve a successful social venture.

I want to tell you about two outstanding ventures that we supported in the framework of the ‘accelerator’. Tech2Peace organizes seminars for young Arab and Jewish Israelis together with high-tech fields training, such as programming, development of applications, and 3-D printing. The participants hold dialogue workshops aimed at creating long-lasting connections between them and bridging divides among Israeli population groups.

Another venture is organizing a job fair for people with disabilities. The entrepreneur behind the project is a disabled woman who, with the Department’s support, is organ¬iz¬ing a conference in October 2018 at Tel Aviv University. It will include lectures and workshops on the employment and integration of people with disabilities, which is expected to lead to choice positions in leading companies offered to new employees with disabilities.

The ‘Hatzuyah’ Theater Production
This play is a dramatic adaptation of the stories of two young Ethiopian Jewish girls’ about their absorption and integration into Israeli society. It presents the identity conflicts they experienced with regard their dual identities and raises questions about the nature of Israeli society that we seek to place on the agenda.

A One-Year Leadership Program for Ethiopian Jewish Teens
This program aims to develop the next generation of Ethiopian community leaders in Israel, strengthens feelings of belonging and pride in the community, brings the youngsters close to their heritage, and nurtures their Israeli identity. It climaxes with a 10-day trip to Ethiopia, in which the youngsters are exposed to their personal and family stories, visit the villages where their families lived, and learn about a significant and important chapter in the Zionist story.

Project Ten
Setting up centers where young Israelis volunteer alongside other young Jews from around the world. One center is located at Kibbutz Harduf in the north, while the other four are located around the world (Ghana, Mexico, Uganda, and South Africa).

A new center will be located in Mitzpe Ramon, where the volunteers will work in the local community and in the unrecognized Bedouin villages in the area. By working in the center, the volunteers enhance values of tikkun olam and promote coexistence of Jews and Muslims from Israel’s periphery.

Launching a TV Program: 120 Years of Zionism
This series was produced in honor of 120 years of Zionism and the 70th anniversary of the State of Israel. It is designed to provide children and youth with historical and ideological lesson on various episodes in the history of Zionism. A recommended episode for viewing is at:

Stipends to Students in the Druze Community
A scholarship program to promote the integration of young Druze men and women studying the exact sciences in the labor market and in Israeli society as a whole.

I hope this gives you an idea of the work we are doing to promote our shared values in Israel via the WZO. I want to thank all our supporters and Partners for Progressive Israel for their support over many years.
Please don’t hesitate to be in touch to get more information and offer ideas. My door is always open for you. 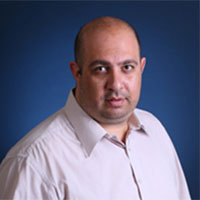 Head of the Zionist Enterprises Department
The World Zionist Organization