2018 Israel Symposium: A Visit to the Ofer Military Court

2018 Israel Symposium: A Visit to the Ofer Military Court

Back to Israel Horizons main page

As part of this summer’s Israel Symposium, we visited the Military Court adjoining Ofer Prison in the West Bank near Ramallah. Gerard Horton and Slawa Duaibis from the NGO Military Court Watch, hosted us during a three-hour visit that gave further evidence of the well-planned, well-executed, and all-encompassing Occupation.

Before entering the prison proper, Gerard and Salwa explained to us that we would be witnessing only one of two very disparate systems of law that are applied in the West Bank. Unlike Jewish settlers who are subject to Israeli civil court jurisdiction, Palestinians live under military law. Since 1967, over three quarters of a million Palestinians have been prosecuted in military courts in the West Bank; the Ofer Court mainly prosecutes Palestinian juveniles aged 12 to 17, mostly accused of stone-throwing. They informed us that Israeli teenagers accused of a crime would generally be immediately released to their parents and would be unlikely to suffer any jail time. The experience of a Palestinian minor accused of the same crime is very different, for reasons that have everything to do with making the Occupation operate smoothly.

How, Gerard asked us, is it possible that 400,000 settlers can be protected from harm in an area inhabited by over two and a half million Palestinians, virtually all of whom deeply resent their presence? How can it be—not discounting the tragedy of even one death of a human being–that on average “only” 5.7 settlers have been killed annually over the past seven years? Most crimes prosecuted at Ofer, he explained, take place within 800 yards of a settlement; it would be too expensive to flood the Territories with soldiers. It is the intimidating force of mass administrative detention and imprisonment at points of friction across the West Bank that does the job. Resistance is perceived as futile.

Under this ongoing system of oppression, the crime of even one accused stone-thrower cannot be overlooked. The Occupation has its ways, we were informed: somewhere between 20,000 to 100,000 Palestinian informers help the police identify the culprits, further destabilizing and demoralizing a Palestinian population that now cannot trust one another. Both sticks and carrots are skillfully proffered: a potential informant may be told that upon compliance, he or she will receive a work permit for Israel; upon resistance, a needed hospitalization or any other “privilege” can be withheld. The system works well, making clear that even if Israeli soldiers are not physically present; control by Israel is absolute for everyone at some point.

Gerard and Salwa continued a seemingly unending tale of the pervasiveness of the Occupation. A child suspect – frightened by a middle-of-the-night intrusion, taken from his home to be interrogated at a nearby settlement – is never told that he has the right to an attorney. He has already learned from the experiences of others that he must not resist. It is better to admit guilt and sign a (Hebrew language) confession- – whether or not he is actually guilty – and be sentenced to “only” two to four months of prison than it would be to request a trial. Such a trial might not be scheduled for up to six months, during which time he would remain in prison. The chances of being acquitted are almost nil: the conviction rate is 95%.

Salwa told the story an experience of Gaby Lasky, a well-known human rights attorney and Meretz activist, who won a very rare acquittal at Ofer. When the judge, in Hebrew, proclaimed the child innocent, the court translator, whose job was to translate the proceedings into Arabic, was suddenly quiet. When asked why he was holding up the conclusion of the trial, the translator told the court that he was not familiar with the Arabic word for “acquittal.”

Finally, our group entered the court precincts. We met two mothers, one of whom had been waiting futilely for over six hours to be told the nature of the charge against her son. Another, after two weeks of daily visits, was finally to attend the same trial which our group was about to visit. At the outset of the proceedings, the judge, pointing to one among a group of Palestinian attorneys standing near the back of the courtroom, proclaimed “you are the lawyer.” Although the defendant had been held for two weeks, he had never met with a lawyer before that. After a few minutes in which the attorney read the case file and spoke briefly with his client, the trial began. We had the feeling we were witnessing a play, in which all the actors knew their roles and spoke the lines expected of them. We were not privy to its outcome, since apparently sensitive matters were to be discussed, and all visitors were instructed to leave. It was over in a few minutes and we returned for the next trial. This was similar, though with the added presence of a Shin Bet agent who looked exactly as if he had walked in from the set of the TV series Fauda (available on Netflix, with subtitles).

Some observations I drew from our afternoon at Ofer: The Israeli government frequently and forcefully denies the centrality of settlements as an obstacle to peace. This requires that settlers be well-protected, so that the human cost of the settlement enterprise (for Israel) seems minimal. Thus, the vast majority of Israelis, even the settlers themselves but especially the population living in the “bubble” of Israel proper, see an Occupation sustained with comparatively little shedding of Jewish blood. We members of Partners for Progressive Israel were given an invaluable lesson on the pervasive but barely visible evil of the Occupation, one that few Israelis ever have occasion to see.

One final note: Military Court Watch monitors the courts on a daily basis and issues a monthly newsletter reporting on the abuses they witness. Gerard, Salwa, and their colleagues often take foreign visitors like us to the Court to see firsthand how the Occupation dehumanizes the Palestinians – and desensitizes the Israelis. It is an experience that far more Israelis – and foreigners – should avail themselves of. 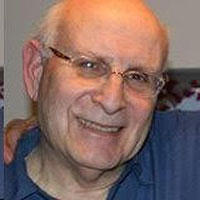 Leonard Grob is a retired Professor of Philosophy and a Vice-President of Partners. This was the tenth Partners’ Symposium he has participated in.

Back to Israel Horizons main page