16th Rabin Memorial Rally: ‘We are here, we have no fear’

16th Rabin Memorial Rally: ‘We are here, we have no fear’ 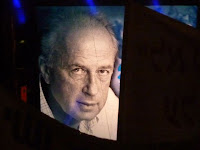 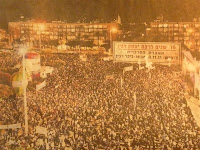 As frequently happens, there were disagreements about how many people were there.
Haaretz, which went to print early, wrote 10,000.  The organizers said 110,000. Maariv said 30,000.  As an experienced crowd estimator, there were clearly tens of thousands of people in the square, perhaps 50,000 or more. And the most striking thing was that most of them were young, many probably not even born, or just toddlers, back in 1995. I hardly knew anyone there. The torch is being passed on to the next generation.  As Yossi Sarid said, there have been many pretenders to bearing the mantle of leadership that Rabin left behind, and maybe the future leaders were right there, in the audience on Saturday night.
Gideon Levy in Haaretz was too tired and cynical, emphasizing the failure of the Oslo process and the peace movement’s inability to bring about a resolution of the conflict, but not seeing that there was youthful and determined energy there in the square that night.
Yes, yesh tikva, there is hope for the future.
Links to songs referenced:
(Shalom Chaver, Arik Einstein)אריק אינשטיין שלום חבר‎ – YouTube
אביב        (To Cry for You, Aviv Gefen) גפן – לבכות לך – מתוך העצרת‎ – YouTube
(Song of Hope, Aviv Gefen)אביב גפן וטל פרידמן – שיר תקווה – בהופעה חיה‎ – YouTube
(Song of Peace, Miri Aloni)שיר לשלום – מירי אלוני – 7.11.09‎ – YouTube
Imagine – John Lennon – YouTube  (Imagine, John Lennon)
By hschenker| 2011-11-15T21:47:00-05:00 November 15th, 2011|Blog|0 Comments