The Joint Democratic Initiative – Outlines for the Creation of an Arab-Jewish Party
by Yaniv Sagee; Translated by Ron Skolnik

I write these words after five and a half years of activity based on my realization that a joint Arab-Jewish party is a necessary vision, the only one that will enable the building of a significant political force dedicated to equality, partnership, justice, and peace. A joint Arab-Jewish party is required to effect the changes necessary in Israel and to guarantee Israel’s democratic character and enable the two nationalities sharing the same homeland to dwell together.

For more than eight years, I’ve been meeting with Arab citizens of Israel. Hundreds of in-person encounters. Thousands of calls. And it’s made me a different person. I’ve now got a much better understanding of the depth of the discrimination and inequality that Arabs in Israel are forced to endure. I’ve got a better grasp of my own responsibility as part of Israel’s privileged majority.

And I’m grateful for the cultural richness I’ve been exposed to, and that’s become part of my world. Arab culture and Jewish culture together create a special human tapestry. I’m convinced that partnership between us is the key to our future, and I’m committed to sharing my personal transformation with Israeli society and with the Jewish people to whom I belong.

Two and a half years ago, I joined up with 12 others, and we became partners in establishing a Jewish-Arab civic movement, the Joint Democratic Initiative (JDI), whose goal is to promote the creation of a joint Jewish-Arab political party that works for equality and stands for equal representation of Arabs and Jews.

The Joint Democratic Initiative is a movement of citizens, women and men, Arabs and Jews, with broad support from social activists, artists, intellectuals, and scientists. JDI seeks to establish a joint, equal, Jewish-Arab front that will advocate, without compromise or ambiguity, for the following principles:

Civic justice: A commitment to full equality for all the country’s citizens, the repeal of the 2018 Nationality Law, which gave preferential status to Jewish citizens, the eradication of racism, and the restoration of the Arabic language’s official status.

Political justice: The need to end the occupation and reach an Israel-Palestine peace agreement predicated on two independent, sovereign states based on the 1967 prewar borders.

Social justice: A commitment to the principles of social welfare, bolstering outlying areas and disadvantaged communities, and ensuring a dignified existence for every citizen.

In July 2018, JDI published its founding manifesto in Ha’aretz newspaper, and it was promptly signed by more than one thousand Israelis, Arabs and Jews, who announced their support for the movement’s aims. With Israel having now completed its fourth elections within two years, JDI is calling on parties, groups, and individual citizens who share our values and positions to work together with us to establish a Jewish-Arab joint political front. Such a front is needed to save us from a loss of our moral compass and a grave danger to our very existence, and will serve as a basis of solidarity and a source of inspiration for all those diverse members of the public who long for peace and equality.

What is the electoral potential of a joint Arab-Jewish party?

Public opinion polls and studies carried out in recent years have revealed that there is about 60 percent support in the Arab community, compared to only about 5 percent in the Jewish community, for Arab-Jewish political partnership. Turnout of Arab citizens is traditionally weaker than that of Jewish citizens. But additional polling data indicates that many of the nonvoters in the Arab community refrain from voting because they feel there’s no party worthy of their vote, and because they want their vote to strengthen a political force that makes actual decisions – an aim that is very difficult to realize via the predominantly Arab parties in the Joint List and United Arab List.

In the March 2020 elections, about 63 percent of potential Arab voters cast a ballot and this year, turnout dropped significantly, to about 50 percent. Even if we factor in that about 15 percent of Arab citizens don’t take part in elections out of ideological reasons (e.g., some identify with the Northern Branch of the Islamic Movement, which calls for boycott), that still leaves a huge share of the Arab community seeking a political platform that delivers what it’s looking for. To this group, we can add the approximately 10 percent of the Arab community that typically votes for what that community refers to as “Zionist parties,” such as Meretz, Labor, and others.

These two groups, which taken together make up about one-third to one-half of the Arab community’s eligible voters, do not vote for either the Joint List or United Arab List and form a huge reservoir of potential votes for a joint Arab-Jewish party. Additional support for such a party might also come from those left-Zionist voters who currently feel “politically homeless,” including some Labor and Meretz voters who are looking for an exciting new vision and renewed hope.

A distinct majority of the Jewish community in Israel identifies with the rightwing, and this is manifested in support for parties of the right and center-right. That being said, if voter turnout among Israel’s Arab citizens were like that of its Jewish citizens, we could have a center-left majority. But in the current political circumstances in Israel – where Jewish parties with a small, token representation of Arabs operate separately from Arab parties that have an even smaller, token representation (if any) of Jews, and with the Arab parties either being excluded from or excluding themselves from coalition governments – it’s impossible to significantly expand turnout in the Arab community.

But there’s an alternative, and the organizing political principle that lies at the foundation of the joint Jewish-Arab effort is this: For the Arab citizens of Israel to participate in Israeli democracy at a voting rate comparable to that of Jewish citizens, there needs to be a party that will effectively address the Arab community’s needs by taking part in a center-left governing coalition and being part of the country’s decision making. Such a party must include prominent representatives of Israel’s Arab citizenry in equal measure (i.e. Arab and Jewish co-chairs and alternating Jewish and Arab candidates on the party slate); at the same time, the party needs to be willing and able to play a role in the institutions of government. The only option in this sense is a joint Jewish-Arab party whose basic operating principle is true, full, symmetrical, and equal Arab-Jewish partnership.

Ultimately, Israel’s future as a country that combines being a national home for the Jewish people and being a democracy where all citizens are equal obliges us to break the prevailing political paradigm – which is that parties in Israel are put together based on separation by national identity. Let me reiterate as well that the Palestinian-Arab citizens of Israel are a relatively dormant constituency who have the potential to change the political map and return the center-left to power. These two factors form the basis for the establishment of a joint and equal party for Arabs and Jews in Israel.

Regrettably, over the last five years, I have yet to find the courageous political leadership needed to effect this idea. In the course of these five years, the Left has become nearly irrelevant in Israel’s political calculus, and in the election campaign just concluded, the fight to lead the country was waged between different factions of the Right. It’s still not too late, though, to change political strategy, shatter old paradigms, and ensure our future. 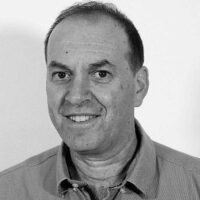 Yaniv Sagee is the Executive Director of the nonprofit Givat Haviva education center and a member of the group that co-founded the Joint Democratic Initiative.