I couldn’t help but be slightly disappointed after I arrived at The Guild Bar in Tel Aviv and peered around: where were the masses of passionate Meretz voters crowding the place? It’s a few days before the end, I told myself. Everyone already knows who they’re going to vote for, so it’s redundant for them to come and hear what anyone has to say. I was, at the very least, comforted by the fact that the majority of those in attendance were young voters; I was tired of going to events for left-leaning crowds and seeing nothing but a sea of older, well-to-do, Ashkenazim.

Meretz Chairwoman Zahava Gal-On arrived half an hour late, having just come from another television interview. “This is the fifth event today I’ve spoken at”, she told the crowd; she was clearly tired, her voice hoarse, but still buoyant. Gal-On, in the wake of pessimistic polls, has been working overtime, making appearance after appearance on television, at parlor meetings, and anywhere else she can reach possible Meretz voters. A few weeks ago, I reported on the party’s new campaign, which targeted voters hoping to strengthen the center-left bloc by abandoning Meretz to support the Zionist Union. That decision seemed to be prescient, as some polls now estimate the party barely scraping by the electoral threshold of 3.25%, or about 4 seats.

We’ve been here before, of course: on the eve of the 2013 election two years ago, the party had only 3 mandates, and was deeply concerned, even with a threshold of 2% of being left out of the Knesset. This was during the dark days in which the media was whipped into a frenzy of projecting the takeover of the Knesset by right-wing forces. The reality that unfolded was far more complex, of course. The right only maintained a slight majority, and Bibi’s grip on power was shaken ever-so-slightly by the unexpected rise of Yair Lapid’s Yesh Atid party. Pleasantly enough, Meretz, rather than contracting, doubled its representation to 6 mandates.

This time, the atmosphere seems even more desperate: advertisements have appeared on billboards across the city, featuring a steely faced Gal-On proclaiming that “we cannot afford to lose Meretz”. Whether or not these dire warnings are justified, she clearly does not want to take any chances.

Gal-On explained to the audience, for perhaps the umpteenth time, the misconception that many left and center-left voters have in their quest to unseat Bibi. “There’s a spin that has been repeated, over and over again” she complained, “that assumes that the largest party will get first dibs on creating a coalition. This is simply wrong–the party with the most recommendations will receive that honor. People are making the same mistake that they made in the 2009 elections when they voted for Livni’s Kadima.  If Meretz does not make it into the Knesset because of this ‘strategy’, then [Zionist Union Chairman] Buji Herzog will not be Prime Minister. It’s as simple as that. 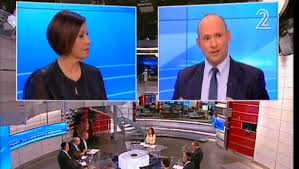 “I’ve had supporters of Meretz come up to me in the last few weeks to tell me how much they love and admire us, and all the work that we did during the last term, despite our small size”. And then, less jovially: “then they tell me that they have to vote for the Zionist Union in order to oust Bibi. Trust me, I want to get rid of Bibi as much as the next person. Their admiration is all well and good, but you can’t take it to the polling booths”. She then pointed to a correlation between Meretz’s drop in the polls to the announcement of a union between Livni and Herzog. And indeed, there’s quite a bit of truth to this: earlier polls predicted nearly 10 seats compared to the near-oblivion the party now faces. And yet, she pointed out correctly, Meretz has been the only party to explicitly state that it would be willing to sit with and only with Buji Herzog as prime minister.

If Meretz does in fact fail to pass the threshold, Gal-On will inevitability be blamed for this failure. That’s a shame, and a bit unfair, given the intensity with which she has been campaigning over the last few months. She has shown herself to be a candidate with real convictions, unwavering in her opposition to policies that other parties and candidates have done their best to avoid. When one audience member told her that as wonderful as Meretz is, it might be best to avoid certain subjects (a back-handed compliment, if I ever heard one), she replied with a charming anecdote: “whenever I take a cab back and forth from Petach Tivka for TV interviews, I usually ride with a driver named Moshe. At one point, he told me: ‘every time you talk about issues like women’s rights, you sound wonderful. Why can’t you just do that? Why ruin it for yourselves by talking about the Arabs, the West Bank, etc.?’ “. “But of course.”, Gal-On continued, “if we did that we wouldn’t be Meretz. We aren’t going to talk about ‘nice’ things to just to get a rise in the polls”.

I have come across numerous people over the course of the last few weeks who are undecided voters, or are planning on voting Mertez, begrudgingly. They’ve all said the same thing: “Meretz is wonderful, but they need a new leader,” “Gal-On is shrill and irritating”, “Her confrontational attitude is unnecessary and off-putting”, and various other comments in this vein. Even Gal-On seems well aware of this (no doubt, chauvinistic) shrewish persona  she has been saddled with, poking fun at her portrayal on the satirical sketch comedy show Eretz Nehederet (“the comedienne who plays me always has me complaining that ‘everything has to do with the occupation!’ She actually does a better imitation of me than I do of myself. But what she says is still true!”). But Gal-On has not arrived on the political scene to please people, or to put them at ease. She discusses difficult issues with gusto, even at the expense of her personal, and by extension party’s popularity–and I’m sure that her supporters wouldn’t have it any other way.

As she was leaving, I asked my British colleague (who is himself writing a piece about the Israeli elections) to photograph the two of us; unfortunately, I won’t be able to upload it due to its poor quality, though he can vouch for the fact that I did in fact meet and converse with her (in a nervous, and stuttering, fashion, but nonetheless). I’m in fact optimistic that Meretz will be just fine come the release of the exit polls Tuesday night. At least, that’s what I plan on telling myself as I make my way to the polling booths bright and early on Tuesday morning.