There is a group of Pittsburgh Orthodox women who often show up at J Street events. They sit together and whisper to each other. Responding to a discussion of the two-state solution, they always ask the same set of questions: didn’t we try this already? Didn’t we leave Gaza hoping for peace? If we go for a two-state-solution, aren’t we going to end up with another Hamastan a couple of miles from Jerusalem?

It has been ten years since Israel “disengaged” from Gaza (plus four small settlements in the West Bank). In the summer of 2004, Prime Minister Ariel Sharon ordered a unilateral military withdrawal and the eviction of 9,000 Jews from their homes. The questions of the Pittsburgh group are the resounding heritage of that political move. The ten year anniversary is a good time to consider what drove Sharon to disengage from Gaza, and what is its resounding legacy.

Shalom Boguslavsky, one of the sharpest Israeli bloggers today, called Sharon’s disengagement from Gaza the most cynical move in the history of Israeli politics. Sharon’s disengagement plan succeeded; he wrote: “it did not bring security or peace, but these were not its objectives. It was a cruel manipulation of the Israeli public and a smokescreen for the international community intended to postpone the solution to the Palestinian problem for the distant future. And it worked.”

Boguslavsky has a point. He quotes an interview with Dov Weisglass, Sharon’s senior adviser and one of the initiators of the disengagement. Weisglass infamously told Haaretz in 2004 that:

The significance of the disengagement plan is the freezing the peace process.  And when you freeze that process, you prevent the establishment of a Palestinian state, and you prevent a discussion on the refugees, the borders and Jerusalem. Effectively, this whole package called the Palestinian state, with all that it entails, has been removed indefinitely from our agenda. And all this with authority and permission. All with a presidential blessing and the ratification of both houses of Congress. The disengagement is actually formaldehyde. It supplies the amount of formaldehyde that is necessary so there will not be a political process with the Palestinians.

So according to Weisglass the disengagement was indeed remarkably successful. It halted the peace process entirely. It gave the Israeli right-wing a powerful weapon – much like the Pittsburghers, they can now argue that the rockets from Gaza prove that the Palestinians don’t want peace, that they want to annihilate the Jewish state. Those who argue otherwise simply refuse to credit Israel for unilaterally removing all of its settlers and all of its soldiers from Gaza.

Sharon’s disengagement plan also resolved Israel’s demographic crisis. There are 6.2 million Jews and others in Israel, 1.7 million Palestinians in the Gaza Strip and 2.5 million Palestinians in the West Bank. There are 1.6 million Israeli Arabs, not including Druze. Thus there are 5.8 million Arabs and 6.2 million Jews between the Jordan and the Mediterranean. Sharon sacrificed 9000 Jewish settlers in order to reduce the number of Palestinians under Israeli rule by 1.7 million.

Withdrawing from one of the most heavily populated areas in the world, Sharon played a magic trick and forestalled that scary moment in which the number of Jews will equal the number of Palestinians. And he was successful. Though Israel’s right-wing accused him of treason, no one considers reoccupying the Gaza strip and settling Jews there. 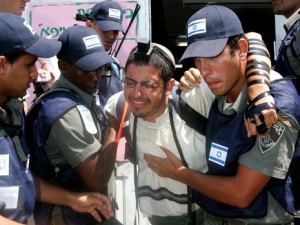 There were other well-planned cynical aspects to the disengagement. Consider the fact that the evacuation of the Jewish settlements was planned for the ninth day of the Jewish month of Av, the annual fast day in Judaism which commemorates the destruction of the First and Second Temples in Jerusalem and the subsequent exile of the Jews from the Land of Israel. The eviction was eventually postponed by a day, but only after Israel’s chief rabbi personally appealed to Sharon. On the ninth of Av 2005, Israel experienced the heartbreaking prayers of Gush Katif’s settlers conflating the destruction of the Temples and of their communities, asking God to save them from the awful predestination. The day after, the Israeli public learned that God did not answer the settlers’ prayers. To make things worse, the government did not have a reasonable resettlement plan and as of 2014, 50% of the families evacuated were still homeless.

The plan was to make the Israeli public tired of hearing about more withdrawals and evacuations. And it succeeded. It sacrificed 9000 Jews in order to allow hundreds of thousands of settlers to continue living in the occupied territories in internationally illegal settlements uninterrupted.

There is one fact on which I fully agree with my right wing friends: the people living on the border of Gaza are suffering as a result of the disengagement. “How would you like to live in Sderot?” one woman yelled at me as she stormed out of the hall when I participated in a panel in New York. But here is the thing: when my Jewish friends in New York and Pittsburgh regularly hear of rockets falling on Sderot, Ashkelon and Nirim, they are rightfully horrified; but they are deaf to the voices of the people living there, many of whom understand that in the absence of diplomacy, there cannot and will not be a solution to the problem of Gaza.

Unlike the regulars in the Pittsburgh group or the woman who stormed out of the theater, my friends in the Gaza envelop region are not only blaming Hamas. They blame Israeli governments who continue employing what they call a “policy of rounds,” a never-ending boxing match, in which the two contestants pause for a few months between rounds; there’s no official Israeli intention to reconsider this failed policy. My friends demand diplomacy.