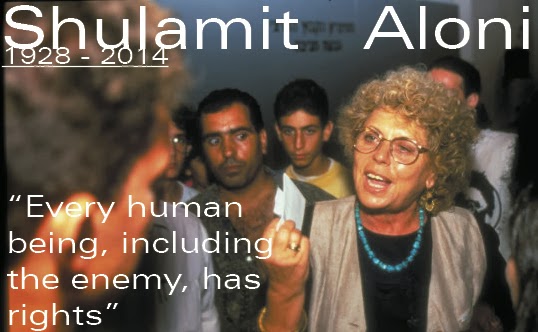 Shulamit Aloni, the symbol of human rights and integrity in Israel passed away on Friday, Jan. 24.  She was 85 years old.

Even her political rivals spoke about her legacy.  Prime Minister Binyamin Netanyahu said, “Despite the deep disagreements we had over the years, I appreciated her contribution to the public and her determination to firmly stand for the things she believed in.”  A similar tribute was given by another unlikely source, Defense Minister Moshe Ya’alon, who praised Shula’s “determination to fight for her values and to express them loud and clear.”

Zehava Galon also called Shula a “moral compass” because she pioneered the idea that civil rights in Israel could not end up being unique to Israel with caveats and regulations based on conflict and security.  Instead, Shula told Israelis that civil rights were universally defined; a country either upheld them or did not.  She intuitively knew and expressed firmly that no security threat, no storied history of oppression and anti-Semitism could justify the theft of human rights from an individual.  The occupation multiplied that theft by millions because Israel was accountable for every person under its control in the West Bank and Gaza Strip.

She was not afraid to say that the Palestinians were being robbed of their rights and their dignity, and that that robbery was the responsibility of every Israeli.  Her fearlessness and energy was so natural that she seemed to reject the idea that one should need courage to speak the truth in Israel.  For her, human dignity and liberty were rights so simple and essential that they should be inscribed as basic law.  And largely because of her they were.

One of the most elegant examples of Shula’s ability to explain Israel’s behavior by a universal set of standards was when she recognized parallels between Zionist self-determination and Palestinian self-determination.  In August 2002, nearly two years into the Second Intifada, while the late Ariel Sharon was prime minister, Shula appeared as a guest on the radio program, Democracy Now!, speaking about the trial of the popular Palestinian political figure Marwan Barghouti.  He had been charged with murder and attempted murder, based on acts committed by the al-Aksa Martyr’s Brigade, which Israel accused him of founding.  In the recording of Shula’s visit to Democracy Now!, host Amy Goodman described the now iconic image of Barghouti raising his handcuffed arms above his head and yelling to reporters in Arabic, English and Hebrew, “peace will be achieved by the end of the occupation. No peace, no security with the occupation.”

To this, Shula says, “I accept every word he said.”  She points out that the image of Barghouti with raised, handcuffed wrists is strikingly similar to images of Zionist freedom fighters arrested by the British prior to the founding of the state.  “[This] was the same speech,” she said, ” ‘we want our freedom’.”

Shula’s demand for law, liberty and due process was as strong as her love for Israel.  She expected the state’s Jewish heritage to guide just legislation, not provide an excuse for slipping out of statutory responsibility.  It was this passion that drove her demand that Israelis push against the status quo.  For her, this status quo was a political culture where people were willing to sacrifice ironclad democracy for first-strike capability, and thus, she pushed Israelis to always question their political positions.

In 1973, she left the Labor Party to form Ratz, the Movement for Civil Rights and Peace.  In 1992, she led the alliance of Ratz with Mapam and Shinui to form Meretz. (Partners for Progressive Israel is a member of the World Union of Meretz; Partners endeavors to this day to educate the American Jewish community to embrace the values of the same political movement founded by Shulamit.) Partners for Progressive Israel’s president, Harold Shapiro, described his friend as “a brave and valiant woman who fought for justice for all people,” and “a guiding light for equality for all.”

Shula saw that no amount of fear, sorrow, anger or grief, however genuine those emotions are, is a legitimate excuse for denying the rights of citizenship.  Despite being a Palmach volunteer in Israel’s War of Independence, she never lionized the I.D.F.  She saw the needs of defense as subordinate to the application of Israel’s laws, and when the state’s leaders contradicted that ethos, she hissed at the hollowness of their actions. Shula was building a democracy in Israel, and she was often steering the process by herself.

Today, many in the Likud, including its leader, talk about a two-state solution with the Palestinians, and with it they’ve introduced a new status quo.  Shula’s legacy tells us to demand more.  It implores us to define the nature of the state that will eventually live in peace with its Arab neighbors.  Will Israel be a place that shrugs its collective shoulders at the difficulty of negotiating with the Palestinians, or will it plant equal rights and justice in its soil and reap its reward?

We continue to invite your reflections and remembrances as comments on this or other of our posts remembering Shula.  But remember that comments do not post immediately, as they are reviewed for civility and to safeguard against spam.