This webinar was conducted by Partners for Progressive Israel on December 3rd, 2020. This version has been edited by Julie Arden Ficks for length and clarity. The full webinar can be accessed here.

Jared Jackson: Introducing our panelists: Rabbi Jill Jacobs, the Executive Director of T’ruah: The Rabbinic Call for Human Rights, and Kenneth S. Stern, the Director of the Bard Center for the Study of Hate.I want to start with a very straightforward question. What is antisemitism?

Ken Stern: The core of antisemitism is that it’s a conspiracy theory about Jews. Jews conspiring to harm non-Jews. It also gives an explanation for what goes wrong in the world.

Rabbi Jill Jacobs: I would add that antisemitism has evolved in many ways throughout the years. It started out as being based in religion. Christians needed to explain why Jews were still around even after Christianity had superseded Judaism. This hatred of Jews then morphed into something that was based on race; even if Jews converted, assimilated or went as far as converting into German society, they would become an even more nefarious force trying to undermine society from within, because one couldn’t tell that they were Jews.

Jared: What are some misconceptions around antisemitism?

Ken: People tend to think of antisemitism as somehow siloed; that it’s not related to the human capacity to see us and them, and promote hatred based on that definition. To give an example, I think everybody would see The Tree of Life Synagogue attack as an event that should be counted as an antisemitic event. Nobody I know would think of the El Paso shooting to be considered in the same context. If you look at the ideology of the two shooters, they were pretty much identical. They were worried about white Americans being subsumed by these people of darker skin. One decided, “Well, it’s the Jews that are making this happen. We’re going to go shoot the Jews.” The other is, “I’m going to go directly for the people that I’m worried about.” This is the same ideology but one is in a lens of antisemitism and one isn’t. Antisemitism has its unique characteristics, but it’s not as if hatred of Jews is the only hatred that exists in the world.

Jill: For some reason, with antisemitism people assume that it’s only going to be on the other political side. It’s not, because it’s a prejudice. It’s everywhere. We know that every prejudice also exists on the right, on the left.

Ken: Some of the same conspiratorial storylines go on the left and right, recycling the tropes about Jewish control of the media, Jewish control of banks, and so forth. The challenge is to be as concerned about antisemitism from whatever source. In some ways, it’s more important inside your own community to call it out as well.

Ken: I don’t think Jews could agree on any definition. Regarding the IHRA: what happened there was the Second Intifada that started in 2000, attacks on Jews in Europe. There was a group that was tasked with collecting data on it called the European Monitoring Centre on Racism and Xenophobia, the EUMC. They had two problems: one was that there were no markers for data collectors as to what to include and exclude in different countries. The second was that they were faced with this challenge: “what do you do when a Jew is attacked as stand-in for an Israeli?” The IHRA said: “here’s a definition on antisemitism.” It’s a list of stereotypes. It was an effort to try to create some sort of a measure over time and over borders. It was not to classify anybody as an anti-Semite.

The concern is that when we allow the government to define what political speech should be suppressed, that’s the danger. It’s always going to be the speech that the government doesn’t like. I don’t think it’s an appropriate thing for any governmental agency, whether it’s the executive order or what Pompeo was saying, to define antisemitism in that context and say that speech is out of bounds. 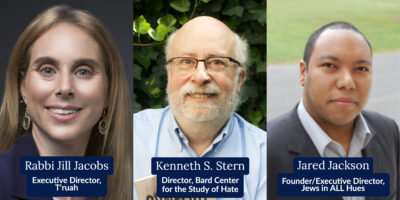 When people use the language of double standard, they don’t really mean that Israel is held to different International Human Rights standards than other countries. What they mean is there’s more of a focus on Israel than other countries. There is for sure antisemitism mixed in there. Running a human rights organization, people say to us, “Why do you only focus on the US, Canada, and Israel, and the occupied territories?” For us, our answer is, “Well, we live in the United States and Canada. We’re a bi-national organization. As Jews, we have a deep relationship to Israel.” Sometimes those who are making this argument say, “Why aren’t you working on Syria or the Rohingya?” There are Jewish organizations who are. It’s just used as an attack line. It’s not coming from people who are actually devoting their time to working on those issues. It’s using that as a tool for attacking those who are working on Israel.

Ken: When I was protesting for Soviet Jews, nobody was saying, “Well, why aren’t you doing Tibet?” If you look back to the history of The Opposition to Jim Crow, there were segregationists that were talking about the Communist Party in the US saying, “Well, why aren’t you talking about human rights abuses in the Soviet Union?” They weren’t. That was a fair excuse but didn’t make them wrong about civil rights in the United States.

In terms of anti-Zionism, between ‘75 and ‘91 when the United Nations equated Zionism with racism as a de facto. People were making the assumption that if you’re a Jew you’re therefore a Zionist. If you’re Zionist, you’re a racist, and you shouldn’t be allowed to have Jewish organizations. There was a correlation between that and experiences of antisemitic discrimination. Then the world conference against racism in Durban in 2001 was, in many ways, an attempt to rekindle that. There were vile antisemitic statements there. To say that anti-Zionism is always antisemitism goes into the same black and white areas. It promotes discrimination against pro-Palestinian activists and Palestinians the same way that the Zionism equals racism coda in law to that against Jews.

Jared: Just to name an elephant that’s been in the Jewish sphere—I unequivocally say that Black Lives Matter. There was a platform put out by the movement for Black Lives; it has since been changed and the language around Israel has been taken out. However, the same rhetoric is still being circulated through Jewish circles. Where do you see the line between the rhetoric that people haven’t checked in on and the reality?

Jill: The two words that came up that sparked a lot of drama were apartheid and genocide. The extreme focus on Israel within this platform is a distraction from that very urgent need to stop police from killing Black and Brown people.

Jared: “In my city, members of the Arab community are demanding that antisemitism be redefined to include them, with the reasoning that they are Semitic peoples too.” Ken, what are your thoughts on that?

Ken: That’s an old and ridiculous thing. Antisemitism as a term was defined in the 1870s by Wilhelm Maher, a German. It had nothing to do with Arabs. It had only to do with Jews. I think Islamophobia is a real deal. To call it something else does a disservice. The same type of thing occurs when people use the term Holocaust to refer to every other type of harm in human history. I’m not saying that the Holocaust is worse by any means. When people talk about the slave trade as the Black Holocaust, it takes away from the slave trade.

Jill: It doesn’t make sense to try to change that meaning now in a way that often minimizes prejudice against Jews. First of all, you can talk about Islamophobia. You could talk about anti-Arab bias. When people say that today’s Ashkenazi Jews are just descended from Qatar converts—it’s an old antisemitic conspiracy. It’s used against the Jewish community and sometimes the language is, well, Jews aren’t Semites, Arabs are Semites and today’s Jews aren’t real Jews.

Ken: I think inside the Jewish community we have to be consistent. We have to be clear about what antisemitism is, and not give people a free ride, even though we may agree with their position on Israel. Also, I think the capacity to combat antisemitism is directly tied to the strength of democratic institutions. I worry about our democratic institutions under stress here, the attack on the press, the attack on the judiciary. If we’re fighting for the strength of our democracy, that’ll make it easier to combat antisemitism.

Jared: Regarding Boycott, Divestment Sanctions, BDS, against Israel—what is its effectiveness? Does it have any legs to stand on when it comes to the treatment of Palestinians in Gaza, and the West Bank?

Jill: Boycotts are a protected right of free speech that’s been established in law. It’s a different question whether BDS should somehow be made illegal, which it should not, in my opinion, and whether it’s something that one chooses to support. We as organizations don’t participate in the BDS movement. We also believe that free speech includes the right of people to speech that we might not agree with. Also, when the government tries to clamp down on free speech, it’s dangerous for everybody, often especially Jews.

One can agree with the BDS movement with the principles and aims of its strategies; it is protected free speech and it’s also non-violent. Fighting BDS is terrible for our community. It saps all sorts of resources that could be going to something that is more productive and positive. Also, it’s generating more of a backlash against Israel. If the goal is to somehow protect Israel, then these kinds of campaigns don’t achieve that goal.

Ken: I would fully endorse everything that Jill said. I’m really worried when we’re in a position where the government tries to pass legislation that takes certain speech that it disagrees with, and says the government is harming people who may agree with that position. The idea of dissent is important. Personally, I disagree with BDS. I think it empowers the extremes on both sides. 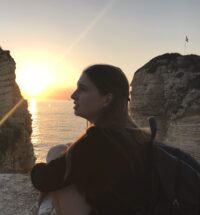 Julie Arden Ficks is the Program Coordinator at Partners for Progressive Israel. She is also a recent M.A. English graduate with specializations in Contemporary Literature, Gender and Sexuality Studies and Literacy