Boycott of Settlements’ Produce is a Move towards Peace

Boycott of Settlements’ Produce is a Move towards Peace

Haaretz reports that Israel informed the European Union on Wednesday that it had cancelled a number of consultations with EU officials scheduled over the coming weeks.This was Israel’s response to the EU decision to mark produce manufactured in the settlements.

This decision created a divergence of responses. As MK Tamar Zandberg wrote that a “loud catharsis among right wing MKs” who fall back on the label of anti-Semitism as de-legitimizing any critique of Israeli policy. Zandberg writes that “the settlements are not part of Israel and are illegal according to international law…..they are the main obstacle on the way to peace”.

The newly elected secretary general of Meretz Mossi Raz commented on the EU decision: “I am not against the decision to mark goods produced in settlements and this marking is not against me. I am for the marking and that marking helps Israel”.

Meretz MK Esawi Friege said that the EU decision was the right thing to do, in that it will “allow the Israeli market to rid itself of the painful hunchback of the settlements.” 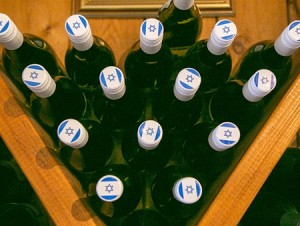 Golan Heights wines were marked with an Israeli flag in protest to EU decision to mark settlement produce.

Marking the produce of the settlements is a step away from the occupation and towards international recognition of the distinction between the legitimacy of the sovereign state of Israel and the illegitimacy of the project of the settlements. Boycotts are a legitimate and non-violent means to create political change. The citizens of European states can now differentiate too, when buying Israeli produce, whether they are supporting the Israeli state or the Israeli occupation. There can be no progress towards a two state solution, or indeed leaving the circle of violence, or, to quote PM Netanyahu, “forever living on our sword”, without allowing for formal and legal mechanisms for distinguishing between those two political entities.

Harking back to every instance of critique of Israel as antisemitism is a dangerous and vicious move. Of course, there needs to be an open and ongoing debate about the ugly re-emergence of antisemitic crimes and discourse against Jews in Israel and the diaspora. However, this decision is not such instance. The continuing occupation and investment in the settlement project is the infrastructure that allows for consistent violation of human rights and countervailing of international law. The EU decision allows the people of Europe to show that they oppose this project without the legitimacy of the state of Israel as a whole. Those who truly care for the fate of Israel and Palestine must resist the populist discourse around it and embrace the avenues it opens towards bringing back the two state solution to the table.

While PM Netanyahu is travelling the world and endorsing the two state solution in his speeches, his government is expanding the settlement project making it less and less plausible by the day. A true act of Philo-Semitism and support for the Israeli state would be to allow PM Netanyahu to match his practice with his statements, and make the occupation a thing of the past.